Third Beat is continuing its mini hiatus, but we’ll be back soon! In the meantime, enjoy this week’s listings. Pick

Chris Hardwick, a TARDIS, and a Tale of Four Cities

When Chris Hardwick says he appreciates a fan’s gift, he means it. Third Beat’s recap of Hardwick’s visit to Toronto 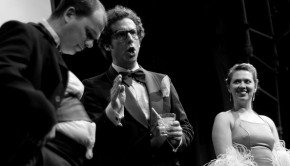 The Carnegie Hall Show feels like a major event on any given night. But when the popular Toronto variety show