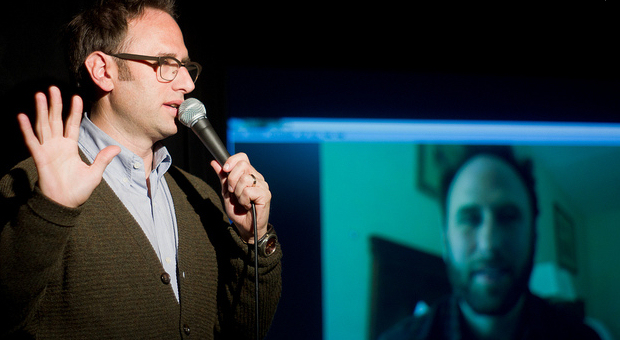 Turns out, the American to Canadian exchange rate on Sklars is 50%.

The Sklar Brothers were scheduled to play Toronto’s Comedy Bar on Saturday night, but the audience for the early show received some bad news from Jason at the top of the evening: Randy was stuck in Minneapolis due to “passport problems”.

First question: Is this a joke? Nope.

Second question: how does one half of a comedy duo manage to do a show under these circumstances?

Up popped Randy on the venue’s projection screen, generic Minneapolis hotel furniture and rolling suitcase visible in the background.

Jason stretched for time off the top by “auditioning” each of the three openers to become the new Sklar for the Canadian touring company of the duo, a funny bit but unnecessary from a time filling perspective.

But amazingly, Jason and Randy were able to do almost an hour of material with very few technical hiccups. With no lag time, the timing of their bits went off without a hitch. It was almost as though they were in the same room instead of two different countries.

By the end of the show, any disappointment on the part of the audience had vanished, replaced by the knowledge that we’d witnessed a comedy rarity.

The real story – which was never fully explained during the show – is a simple case of Randy having an expired passport. It’s an “oops, I didn’t read that date correctly” situation, not an “oops, they finally found out about those hobos I killed” situation. So never fear, Canada is still Sklarbro Country. They will be back, together, and they promised to give everyone in attendance on Saturday a free seat at a live Sklarbro Country podcast recording (expect this to happen in Toronto next fall).