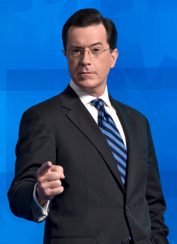 EDIT, 2/20 – Early this morning, audience members for today’s taping were emailed confirmation that it will be going ahead as scheduled. Some media is stating that Stephen will address the absence on tonight’s show, but do not mention a source, so it’s best to take this as a (good) guess on their part.

EDIT, 2/19 – Comedy Central has confirmed that Monday’s taping of the Colbert Report will go ahead as scheduled. Still no official confirmation of the reasons behind Colbert’s absence from the show.

EDIT, 2/18 – At this point, it appears that Colbert is planning to go ahead with Monday’s taping. The automated ticket system was re-releasing cancelled tickets throughout the day Saturday, and there has been no update to the guest listings. As for the cause of the absence, it’s likely safe to translate Colbert’s tweet to be confirmation of reports that his mother is ill.

EDIT, 2/16 – Earlier today the The Wall Street Journal cited “family emergency” as the cause behind Stephen Colbert’s absence from the air, while The Huffington Post quotes unnamed sources in its reports that it’s due to the ill health of his mother, Lorna Colbert. The latter has been the most common hypothesis among viewers as well, due in part to Lorna’s advanced age (91). Comedy Central is saying that next week’s Colbert Report tapings are expected to be a go.

The Colbert Report has temporarily suspended production for at least two nights, for as of yet unknown reasons.

According to users on Twitter, tonight’s taping was cancelled as of late last night. The show’s audience department sent out a notification email, reading in part “Due to unforseen circumstances, we have canceled our taping for the date of your ticket reservation, February 15, 2012.”

A last-minute cancellation is highly unusual for Comedy Central’s fake news shows. The Daily Show has suspended production last-minute due to personal reasons twice during Jon Stewart’s reign: once when his second child was born, and once when a staff member passed away suddenly. If this week’s reasons are of a similar nature, it would be a first for the Colbert Report.

It should be safe to rule out Colbert himself being ill, since he’s previously taped shows with a freshly broken wrist, a cut on the bridge of his nose from a boating mishap, and a nasty case of the flu (as seen below).