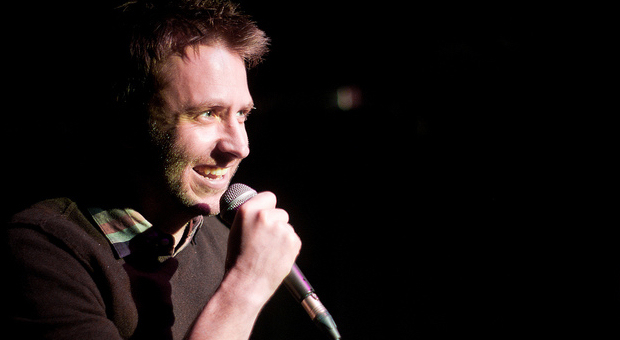 Chris Hardwick is a man being pulled in all directions.

That’s the 10-day plan that Hardwick is currently in the middle of – more specifically, those four shows at Toronto’s Comedy Bar.  The visit includes hours of post-show autographs and posing for pictures with fans (who bear gifts ranging from British gummy candies to a homemade TARDIS), regardless of his looming 5:30 a.m. wake-up call. , one might assume we’re witnessing the final days before an inevitable nervous breakdown.

But the only true countdown in Hardwick’s life is the time remaining before he tapes his hour-long Comedy Central special in New York this Friday night.  (Free tickets are still available through Blacklist.)  His trek to Toronto is part of his marathon of sets in preparation for the big night.

“I found out in December that I had to shoot the special in February, and at that point I had about a half hour that I was happy with, but obviously I needed at least an hour.  So I immediately started performing pretty much every night,” he says.

Even during what was supposed to be his Christmas vacation, he tagged along with friend Al Madrigal to Portland, OR to do guest spots during Madrigal’s headlining weekend at Helium Comedy Club.

“As soon as I got home, I called in favors from everyone in L.A.  Because it’s too late, with like a month or two notice. You can’t book clubs anywhere because they book months in advance.  So I was going to open mics, any stage time I could get, just to cobble together the last half hour,” he says.

While he’s been performing full-length sets as much as possible leading up to the taping, they aren’t a structured carbon copy of what he plans to do on Friday night.  Hardwick has still been interacting heavily with his audiences, and changing up the order of his material from show to show.

After Friday, Hardwick won’t be able to relax his standup writing muscles for long. He plans to retire most of what he’ll perform on the special.

“I’ll have several months before the special airs, so in that time I’ll have to write a bunch of new stuff, so the set will mostly be new” he says. “I feel like people would be bummed if they see the special and come to see me perform and it’s like ‘oh, I already saw those jokes in the special’. I mean, I already feel bad because I’ve done a handful of jokes on the podcast that are going to be in the special. But I guess I sort of have to be okay with that.”

Having a fanbase to feel accountable to is a relatively new experience for Hardwick.  While he had his initial brush with fame as an MTV host in the mid-‘90s, and has had success as a standup and as half of musical comedy duo Hard ‘n Phirm, the high levels of autograph-signing and gift-accepting didn’t materialize until he fully merged his nerdy interests with his professional life.

Hardwick says that early in his career, he felt he had to take jobs no matter what, just for the sake of working.  Now, he only works on projects that genuinely matter to him, a place that he’s “really happy” to be in.

“No matter what, you just have to do things that you care about,” he says. “If you’re doing something you don’t care about, and people don’t respond to it, you feel like a shithead.”

In The Nerdist Way

, Hardwick details strategies for managing life in a way that allows for that luxury.

For himself, it often boils down to “trying to be focused on what I want out of a thing, and just making sure that I always remember that.”

As long as he remembers to focus on getting some sleep before Friday, it sounds like a solid plan.