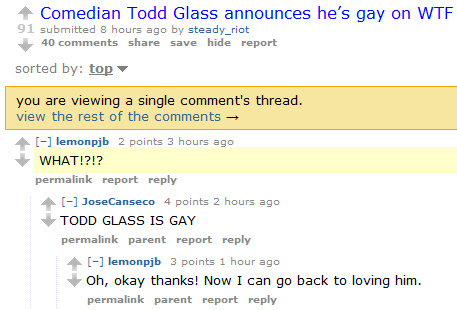 When’s the last time the anonymous internet masses made you proud?

Now that we’re past the 24 hour spoiler alert buffer, it’s safe to say that most plugged-in comedy nerds are aware that comedian Todd Glass came out as gay on Monday’s episode of WTF with Marc Maron.

It was an emotional hour, and the revelation came as a big surprise to most of the comedy community.

Despite how much progress society has made, an announcement like this still comes with an element of risk. Why would he stay closeted until 47 years old if he didn’t have concerns about the reaction?

On Twitter, streams of congratulatory messages were sent in his direction. On Aspecialthing.com, posters marvelled at his grace and strength. Comedians and comedy fans freely admitted to tearing up during the interview.

Not a single cruel comment. No trolls throwing out the f word.

In fact, the only real controversy this has stirred up is Laughspin accusing the Advocate of plagiarizing their article on the subject.

In his interview, Glass encouraged people to openly and casually voice their acceptance of gay people, as a way of creating a more welcoming environment for gays and lesbians.

“My message is never to tell kids to come out. It’s to tell everybody else to fuckin’ make them comfortable enough to come out,” he said.

Based on the support given to Glass, it seems that advice is being heeded at a pretty good pace.