If you’re a comedy nerd (and you probably are), at one point you’ve probably seen a photograph taken by Liezl Estipona and thought, “awesome”. Estipona has been shooting the cool kids of the Los Angeles comedy scene both onstage and off for the last few years, and her “go-to” status in the scene has prompted a new book of her work entitled Liezl Was Here: Adventures in Comedy Photography. 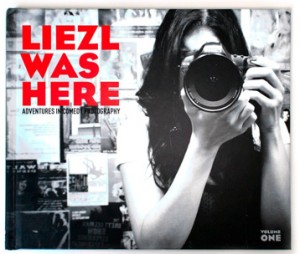 At the risk of sounding like one of those “you must have a really good camera” types, it must be asked: what gear do you use, and how do you edit?

I started out using a Canon Rebel XT and a 50mm 1.4f lens, which treated me well for many years. When Paul F. Tompkins asked me to shoot his Largo shows over a year ago, I decided it was time to upgrade my equipment. Now I use a Canon 5D Mark II, shoot in raw and do all my editing in Photoshop CS5.

What were the circumstances around you shooting comedy for the first time?

I had finally decided to stop commuting to work from Orange County and found some roommates on Craigslist. One of whom turned out to be a comedy fan. We had both never been to UCB and decided to check out Jimmy Pardo’s Match Game. My office had just bought the aforementioned Rebel XT, so I brought it with me with the intention of learning to use it that night. I only one photo that night, since Jimmy pulled me up from the audience to be a contestant, and it turned out horribly in all respects. I lost the game and my one shot turned out horribly.

Have you done a lot of work in other photographic genres?

I took photography in high school and college, from making pinhole cameras and processing film to fashion photography. It gave me a pretty solid foundation, so I’m occasionally commissioned to shoot family portraits and shoot food for articles, but since I’m no studio photographer, I stick to shooting in existing conditions with the bare minimum of equipment.

Who are your favorite comics to shoot, onstage and off?

I always enjoy the comics who are a little more animated on stage and can convey action, feeling, or a story in one shot. Marc Maron, Zach Galifiankis, Paul F. Tompkins, James Adomian, and Thomas Lennon are prime examples of people who are consistently fun.

Is it ever a challenge to make performers feel comfortable being shot offstage, if it’s someone who might not have a relationship with you?

It is, and I think you can usually tell in my shots, which is why I tend to only shoot those who know who I am. I’ve been shooting Paul F. Tompkins, Doug Benson, and Comedy Death Ray/Bang Bang for a long time, and I think when other associated comedians see those guys talking to me, they loosen up a bit as well. When I don’t have that luxury, and I sense some awkwardness on their behalf, I just go ahead and tell them I shoot for UCB. They usually relax when they realize I’m not paparazzi and their photo isn’t going to a TMZ site.

When you shoot at the same venues over and over again, how do you keep from falling into a rut as far as composition goes?

I try not to think of it as a bad thing, Being familiar with Largo and UCB just enables me to know where I have to be stationed to get the shot I want. As a result, I’m shooting a lot less than I did 3 years ago when I had little sense of editing and was more about quantity over quality.

When did you start thinking about putting out a book?

Gallery 1988 was pretty instrumental in my decision. When I saw a man drop a couple hundred on Wet Hot American Summer artwork, it made me realize that there might be an audience for this kind of thing. I was finally sold on the idea when I saw how well Rick DeMint’s (of Portroids fame) Never Not Funny Pardcast book turned out. Being a graphic designer, I knew a book was something I would have no problems producing from scratch.

What was your mandate for image selection?

I have a horrible memory, so I usually look for that photo that explains the scene without an accompanying caption.

How many of these shots have we never seen elsewhere?

I’d say a good 95% of my shots are pretty exclusive and I’ve been lucky enough to be present for some pretty special shows, like The State reunion in 2008 and Judd Apatow’s Funny People showcase. Unfortunately with the crash of my hard drive, those files no longer exist anywhere but my Flickr stream.

There’s a shot of Amy Poehler and Aubrey Plaza from a Gravid Water show at UCB, that involved improvising a scene that involved a kiss which was pretty hugely popular in the realm of Tumblr. I got a lot of flack from Parks & Rec fans for not capturing the actual kiss, but I like to leave moments like that in the theatre.

You’ve mentioned that you may have a second book on the way, focusing on the UCB-LA. Is there anything you’ll do differently when putting together the next one?

I won’t proofread at 4am the day of printing.

Liezl Was Here is available to purchase through blurb.com. For a taste of her work, check out her website at www.liezlwashere.com.