After 14 years with the same look, a Comedy Network rebranding has been way overdue. In fact, I’d argue that the original logo should’ve been retooled before the first designer even got paid.

Today’s the big day, Canada. The worst is behind us.

The good news is, the new logo isn’t nauseously “wacky” like the old one tried to be. The very clever promo supporting the launch of it points to their awareness of this: two network representatives reveal the logo to a silent focus group, and they both gleefully applaud after one member proclaims “I’m not laughing”. Brilliant.

I can’t identify the logo font, but it’s a thick sans serif, in lower case like the previous version. Elsewhere it’s been compared to the old CHUM logo, while I feel a hint of the BiteTV logo as well (interesting, since Bite is Canadian cable’s shiny new comedy toy).

Gone is any further illustration, leaving them with simply the word “comedy”. So yes, it’s understated. But maybe too understated? My first sight of it on their website didn’t grab me as much as I hoped it would. Dark blue on white doesn’t exactly pop off the screen (and given some of the already-notorious internal changes made by parent company BellMedia, the color choice must feel slightly Orwellian to the staff). 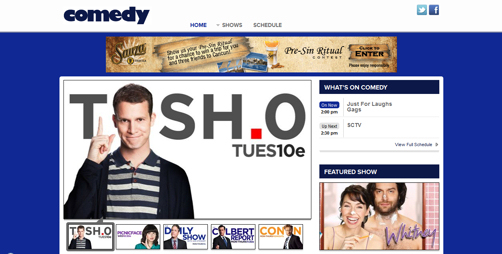 But judging by the new promos airing today, they’ve given themselves plenty of freedom from a color standpoint. I’ve already seen the logo as yellow on red, grey on red, white on teal, and white on purple. This is supported by a slew of anything-on-white images using their secondary font for individual programs.

It will likely take some time for the full branding to be rolled out. As of this writing, their bug (that little decal at the bottom corner of the screen) is still the old version. You’d think that would’ve been the first thing they changed. (I stand corrected: the first thing should be the downloadable logo on the CTV press site, which again is still the old one.)

But back to the aesthetics. The overall verdict? This is good.

Now if we could just convince them to further improve the fuctionality of their website and stop with the geoblocking of clips they don’t actually offer on their own site…. Maybe in another 14 years?