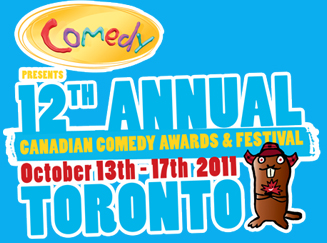 It’s that time of year again, folks! The Canadian Comedy Awards are in Toronto.

Yes, Toronto again. What happened to last year’s talk of takin’ this party to Ottawa? No idea. But we’re moving on and getting ready for a jam-packed week of shows and panels in the centre of the comedy universe (I don’t actually believe that; I’m just trying to poke Bill Brownstein’s journalistic hornet’s nest).

The nominees in the live categories will be performing throughout the week at venues around the city, but primarily at Comedy Bar where there’s to be a brand spankin’ new cabaret space where the rehearsal room was. Now, your dear editor was at Comedy Bar on Saturday, and the old walls were still standin’. So there’s a possibility that tonight’s pre-fest visit will play out like a bit of a Trading Spaces episode. (There may be tears over the fireplace. Obscure Paige Davis references, anyone? No? Hmph.)

Regardless: it’s an exciting week of shows ahead, plus the daytime events at the Delta Chelsea. Regular readers know how much we love a good panel, and this year’s CCAs will be no exception. The three sessions on Saturday promise to be stellar: Web Comedy, Prose Humor, and How To Get Out of Development.

More details on those, and the whole week’s schedule, can be found at canadiancomedy.ca.

Some of the events will be covered here on Third Beat, but get this: your faithful editor is the secret behind-the-scenes Tweeter for the CCAs this year. Shhh, don’t tell anyone! Follow me… er, follow the CCAs at @canadiancomedy for all the updates.