Pam Victor is a Massachusetts improvisor and frequent Del Close Marathon attendee. This year, Pam decided to enjoy the 13th annual Marathon from a new prespective, which didn’t involve logging any hours at the main hub of the UCB Theatre. A lot of improv lovers wouldn’t dare miss out on some of the craziness of that space (including the audience member who reportedly vomited all over herself on Friday night), but Pam lived to tell us all about life outside the hot, sticky walls of the UCB Theatre:

After clocking a mere 15+ hours at the Del Close Marathon last weekend, most of the shows are a big mush of improv squishiness in my sleep-deprived brain, but I’ll try to give you a run-down of what I saw.

This year, I decided to try a little change-up from my usual tactic of parking myself in the moist Petri dish of the Upright Citizen’s Brigade Theatre. After last year’s experience of waiting on line outside UCBT for over two hours and still not entering in time to see Improvised Shakespeare, I was leery of being improv-blocked again. Thankfully, the organizers seem to have done a much-appreciated pre-emptive strike by putting more big names and popular shows in the other theaters this year.

So I primarily put in my time at the Hudson Guild theater, where I never had to wait in any lines and there was always a seat. The only time the room was packed to a humid, virus-friendly capacity was on Sunday evening from about 5:30 on, when there was a slow-moving line and the no-reentry policy was put into effect.

Among all that improv, my personal highlight of the marathon was The Jamal, an all African-American collection of players from New York who I definitely will try to see again as a group or in their other incarnations as Nobody’s Token and Doppelganger. They were extremely skilled improvisers, and they offered a fresh outlook from the over-abundance of 25-year-old white boys. No offense, white boys, I love you all dearly, but it’s f*cked there aren’t more black improvisers out there. Improv theaters should do anything they can to make people of different races, cultural backgrounds, age demographics, and sexual orientation, etc. feel more encouraged to do improv. The whole improv world would be brought up by a greater diversity of performers. 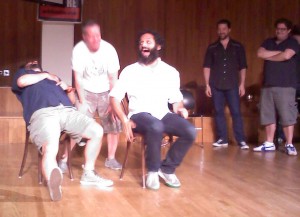 Facebook at the 2011 Del Close Marathon. Photo by Pam Victor.

Getting off my bully pulpit, other great DCM 13 sets were the ones you would think would be great. John and Scott (Lutz and Adsit) at FIT on Friday night performed the set with the depth and admirable technique. Bassprov (with Lutz) at the Hudson Guild on Saturday made me fall in love with them all over again. UCB TourCo All-Stars at FIT on Saturday night were very fun to watch.

Climbing back onto my bully pulpit again for a moment, I am thankful there are performers like Shannon O’Neill. In my humble opinion, UCB needs to establish an environment that allows more women into the higher ranks, and not just the ballsy ones but also softer voices who will add flavor and subtlety to the show.

Regrettably, Friday’s Baby Wants Candy at FIT was disappointing, and I say that as someone who adores BWC. The show felt thin with four performers, and Peter Gwinn can only do so much. I miss Eliza Skinner and Rebecca Drysdale. Another performer I missed seeing was Paul Scheer, from whom I always learn a lot by watching. I wish Scheer-McBrayer would return to DCM, but I fear they both may have gotten too big to make space for the underpaid, under-appreciated improv world.

On that note, I was glad that Jason Mantzoukas made time in his busy working schedule for DCM. Although he had to fly back to LA before Mother and ASSSSCAT 3000, he added a definite charming adeptness to the Facebook show at FIT on Saturday night, a show that was another huge highlight of my weekend. Probably the most fun show of all the ones I saw. With a killer cast featuring Mantzoukas, Bobby Moynihan, Horatio Sanz, Owen Burke, Chad Carter, Chris Gethard, Jesse Falcon, John Gabrus, and Gavin Speiller, it looked like they were having as much fun as the audience…which was a lot.

More great shows were to be found at Hudson Guild on Sunday. The Writers Who Never Talk, featuring 30 Rock staffers, was hilarious, and I hope they don’t get fired for their Alec Baldwin impression. I’ll never look at chocolate-covered almonds served from a helmet in the same way again.

I saw a lot of great stuff coming from Chicago, naturally. Very strong, very adept. Probably the most interesting sets came from groups like Den Mother, The Katydids and Classy D out of iO.

So, that was a post-DCM geek-out from my objective observer status. Once I catch up on my sleep, I’ll be looking forward to next year.

Pam Victor is the producer of The Happier Valley Comedy Show and the founding member of The Ha-Ha’s, a troupe out of western Mass. Pam’s blog is My Nephew is a Poodle.