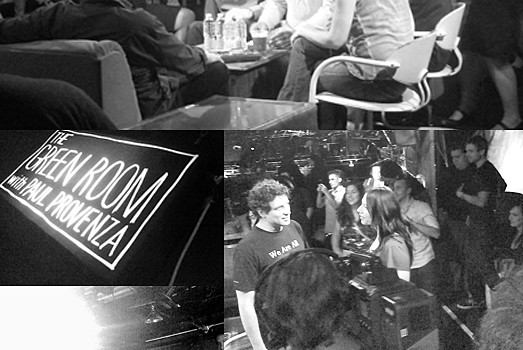 I’m going to start this mini recap of Saturday night’s Green Room taping at Just For Laughs in Montreal by pointing out two things. 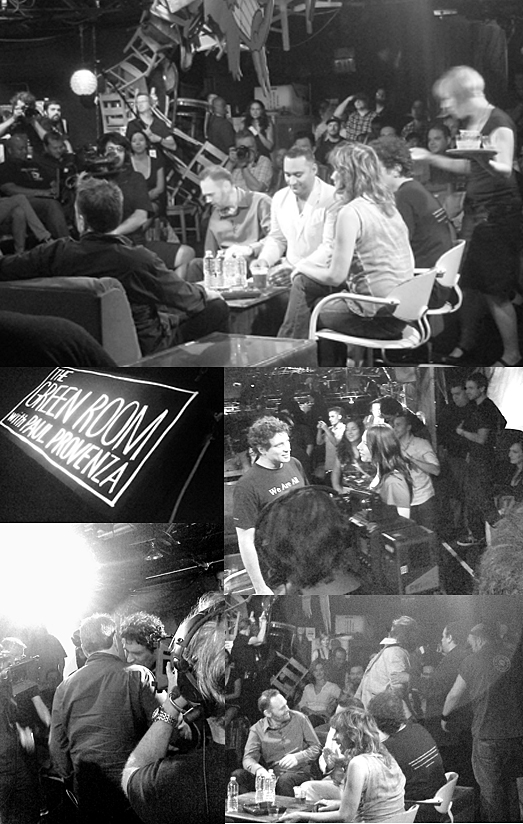 Scenes from The Green Room taping, including the removal of Tony Clifton (bottom right). Photos by Sharilyn Johnson & Robert Smith.

First, I’ve said this before, but sometimes it feels like Paul Provenza was put on this planet just to create things that please me. The Aristocrats. Satiristas. And now The Green Room, one of my favorite shows on television right now.

Second, I have to feel very strongly about an idea being just plain bad before I dedicate an entire article to it.

I was ecstatic when Paul mentioned the tapings on Twitter a few weeks earlier. I’d seen The Green Room as a live show at the festival back in 2007, and was in love with it even then. Comics sitting around talking about comedy, just being comics. What’s not to love?

Having secured coveted tickets to the first of two shows, I was thrilled to hear that the lineup would include some of my favorite comics: Caroline Rhea, Bill Burr, Russell Peters, Lizz Winstead and Colin Quinn.

Saturday morning, I picked up the daily schedule from the info desk at the Hyatt (a detailed outline of every single one of the day’s events, photocopied on colored paper and stapled in the corner, a JFL tradition from since before my time). Added to the lists of guests for both shows was Tony Clifton.

For anyone unaware, in 25 words or less: Tony is an asshole drunk lounge comic/singer character, portrayed originally by Andy Kaufman and subsequently by former manager Bob Zmuda and others. (Although they probably would want me to put the word “allegedly” in there.)

The basic premise is that he provokes. Meaning, he acts like a dick, and people getting pissed off about it is supposed to be evidence of its genius. Or something.

Andy Kaufman was a big deal, and groundbreaking at the time, and some people are still fascinated by him. That’s great. But the Tony Clifton character – or more importantly, its existence – has little to no relevance to even the most comedy-savvy of my generation. The premise that he MIGHT be a real guy was played out decades ago. We know he isn’t, and the expectation that we’re supposed to still be intrigued by the uncertainty of this is a little insulting.

The Green Room is at its best when it’s real. I don’t mean serious, I mean real. It gives a slightly amped-up version of what people would experience in an actual green room full of comics, just being themselves: smart, funny, and passionate.

For the first half hour of the taping, Paul’s guests weren’t allowed to be that.

Tony was mic’d and seated behind the rest of the panel. The interruptions started almost immediately, with Tony jumping in every time a guest started to say something interesting.

The dirty jokes he interjected with were funny. Horrible, but funny. That wasn’t the problem, as you may have read elsewhere online.

The issue was the fact that this killed the conversation’s momentum, and got to the point where the entire production felt like a waste of everyone’s time.

Eventually, Provenza “called over his security guy” and they “escorted him out” and he “put up a fight” and was “wrestled to the ground” and other theatrics so obvious that they require quotation marks.

It was just plain unnecessary for what The Green Room is.

For those of us engaged in a lifetime love affair with comedy, The Green Room is like great sex. Tony Clifton killed my comedy boner.

Between this, and how all five panelists were almost never on stage together at the same time (walking out in a huff for long stretches became a running gag), I have no idea how this episode will cut together. There was good conversation taking place post-Clifton, but they won’t be able to edit around it even if they wanted to (I can guarantee they don’t want to). For the first time in this show’s run, I can honestly say I’m glad it’s only a half hour program.

Paul is an incredibly smart guy, and I don’t doubt he has a sound justification for trying this. I wish I’d had a chance to catch up with him at the Hyatt afterwards to learn what that justification was, and why he himself was seemingly the most entertained out of everyone when Tony was being dragged out. Chances are, it would’ve ended in me saying “ok, I can respect that.”

But as it stands, I’m a firm believer that The Green Room should stick with actual comics and the occasional industry type.

I bet Bob Zmuda would make a great guest.