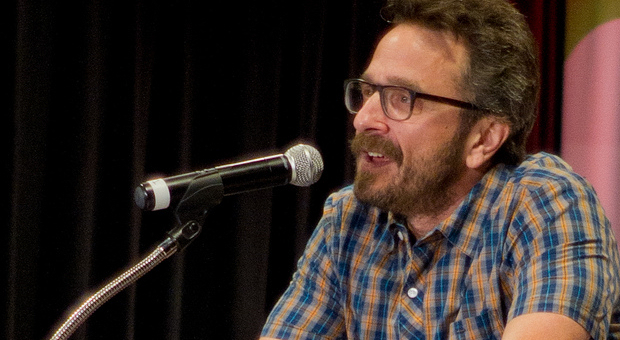 Edit, July 30 a.m. – Marc made good on his promise to post the full audio of his speech this morning. So don’t waste your time reading my interpretation of the events. If you subscribe to WTF in iTunes, it will download like any other episode. If you don’t, head here to grab it.

It seems hacky to even attempt to describe anything that Marc Maron does.

But the intimate honesty Maron puts forth when talking to listeners (seemingly) one-on-one is no match for the moments he provided with in his Keynote Address, opening the Just For Laughs Comedy Conference on Thursday afternoon.

It’s doubtful anyone in the audience guessed that it would take such an emotional turn. Even though he wrote the words himself, it’s unlikely Maron predicted it either. The session began with the master of standing-behind-a-podium-infront-of-industry, Andy Kindler, enlisted to introduce the man of the hour. Wait… who is that again?

“Welcome to State of the Industry 2011!… What can you say about Louis CK that hasn’t already been said?… That’s what I call the Wrong Intro Schtick,” Kindler started.

His introduction turned surprisingly sweet, calling Maron “an empathetic savant”, and of his podcast, “I feel very lucky and blessed that this is in the world.”

Maron started by recounting a story referenced in Kindler’s introduction, about the two of them plus Eugene Mirman (“we’re 3 very different kind of Jews”) searching for a Target store while on tour, using Andy’s not-so-accurate GPS.

(Audiences at the Alternative Show were treated to this tale in 2009, and it certainly holds up.)

Okay, time to begin the speech in a formal manner, starting with the topic many of us predicted he would: his struggle with doing it in the first place.

He spoke of this on the podcast. He roamed the room stressing about it before going on.

Sure enough, he called out the internal conflict that executing such a task creates, and how he’s been fighting with the voice in his head that tempts him to “’ruin your career! Burn some bridges, fuck it up! C’mon, fuck it up!’ So that’s happening right now. I was all night fighting with my brain to not fuck this up.”

“I’m the kind of person who has to deconstruct even a good thing,” he said, trying to determine why he was asked to even do this.

He noted that he’s been a comic for 25 years, and has only been invited to the festival a few times in the past. Which is weird because “I’ve had a lot of new faces over the years. They did have me on the Sad Old Faces show a few years ago, and I appreciate that.”

“I have not made anyone in this room any real money. I’m working out of my fuckin’ garage. I’m in a constant stage of resentment with many of the people in this room.”

“This is a setup. They’re fucking with me. What kind of bullshit is this?” “I’ve put more of my life into building my clown. My clown was fueled by jealousy and spite…. I’m the guy who read The War For Late Night and thought that it was about me not being successful in show business. I’m the clown who thinks that Jon Stewart’s success is due to his commitment to a hairstyle.”

“Three years ago, my clown was broke, on many levels. My manager told me I was unbookable.”

Maron was the first to fall silent, understandably chocked up. The assembled group of industry types, paid to either talk funny or talk fast, rendered the room pin-drop silent.

He took a step back to compose himself, a moment that suddenly made the phrase “time stood still” seem grossly overused. It was like nobody even breathed. Not a single blogger’s keyboard was in use.

In writing, maybe it sounds like an awkward moment, that would cause everyone to collectively stare at the floor. But somehow, and the way it always is with Maron, there was something right about it. Things needed to be said, and needed to be heard.

“Doing the podcast and talking to comics saved my life. That’s what comedy can do. And you know what the industry had to do with that? NOTHING.”

He wasn’t here to slam the industry, he said. He’s not good those kinds of jokes, and wouldn’t be doing so in this speech. He recalled a joke he told at a Comedy Central party:

“’I’m glad Doug Herzog and Eileen Katz moved from MTV to Comedy Central, because I think all television should look like a 24 hour around the clock pie eating contest.’ I don’t know if it was the venom I said it with… but two days later I was in Eileen Katz’s office apologizing or that joke.”

“I want to apologize to Doug Herzog. Since you’ve been there, Comedy Central has become the best pie eating contest on television. What’s he gonna do – fire me from my garage?”

“I don’t think I would have survived my childhood without standup comics…. I love comedians, I respect everyone who goes all in and attempts what I consider to be a noble artform.”

“We comics are out there on the front lines of our sanity…. We’re out there in rooms, dive bars, bookstores… trying to connect…. We are out there driving 10 hours straight to feature fill in the blank city….We are out there pretending that we like club owners and listening to the their ‘input’…. We’re out there fighting the good fight against our own weaknesses, battling courageously with internet porn, booze, pills… sad angry girls we can’t get out of our room…. We’re up making our own waffles at 9:58 am, 2 minutes before the free buffet closes. And we’re happy about it. Don’t underestimate the power of a lobby waffle to change your outlook.”

He rattled off a list of 10 pieces of advice for the younger comics in the room:

Hollywood is not your parents. Try to find a manager who gets you.

When a assistant says “he’s on a call… he’s in a meeting… or or or…” this means “they have no time for you, you have nothing going on, go try to make something happen so they can take credit for it”.

If they say “they loved you, you nailed it,” etc, that means “you didn’t get it, and someone will tell you second hand.”

“There really is no business like show business, except maybe prostitution. There’s a little bit of an overlap there.”

“Comedy saved my life, but also destroyed it in many ways.”

“We lost a few really great comics this year. Greg Giraldo isn’t here, and it’s weird, because he was always here…. He was smart, current, honest, courageous. … He was a guy who seemed so fuckin’ alive, that to accept that he isn’t is so fuckin’ hard.”

“In an interesting twist, Robert Schimmel didn’t die of cancer, but he still passed… He made me laugh a lot. I listen to his cds now if I want to laugh, and that’s the biggest tribute I can give.”

He recounted the life of Mike DeStefano, and the words of his brother: “doing comedy is what saved him”, he said.

“He knew in his heart that he was living on borrowed time, and every day was a gift.”

“I’m not sure if there’s a point to this speech. All I know is if you’re a comic, hang in there if you can…. I know my place in show business now. It’s in my garage.”

“There are a few things more important than comedy. But they aren’t funny. Until we make them funny.”

Another comic I spoke to recently, in another context, used the phrase “a love letter to comedy”. Ultimately, that’s exactly what this room was the recipient of.