Tim Minchin: That guy, from that thing….

The frustrating thing about website analytics is seeing that people have found your site because they were desperately looking for a specific piece of info, but which they wouldn’t have found on your site.

Based on the number of people searching for variations on “comic with piano craig ferguson”, comedian Tim Minchin must have made quite the impression on the Late Late Show Thursday night. A hell of a lot of you are apparently desperate to know his name. And now you do. Unfortunately, he wasn’t yet listed as a guest when I compiled my weekly talk show list.

For the uninitiated: Minchin is an Australian comedian/pianist, who has gained a pretty hefty following overseas in the past few years. His US/Canada profile is increasing at a rapid rate, and he’ll be spending June and part of July touring North America. Dates are available on his website.

As for that performance on Ferguson? Here ya go: 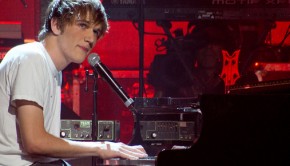