Earlier this week, I bought a bag of “sugar bush maple” flavored coffee. Every time I pull it out of

When a hefty piece of comedy criticism begins with the lead “In a recent Vogue interview,” it’s time to reach

My conversation on CBC Radio tomorrow is about (spoiler alert) comedy on television, and how frequently great shows are short-lived.

Had a downright delightful time at CBC this morning, recording a piece with Craig Norris for this Saturday’s Laugh Out 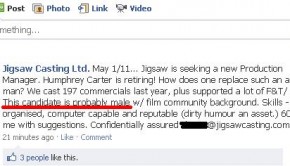 If you run a casting agency, you’re probably accustomed to hiring people for gigs based on appearance, ethnicity, age, and

Highlight of the week? Hands down, Maron on Conan. He’s the first guest, too. Love it. Monday, January 17 Jay

While catching up on my post-holiday podcast-listening, I was intrigued by the Sklar Brothers discussion with Chris Hardwick re: their