Jim Carrey: Inside “Inside the Actors’ Studio”, Part I

When I learned my friend C.J. would be attending the taping of Inside the Actors’ Studio with Jim Carrey in New York back on Dec. 12, my instructions to her were “have fun, and take notes”. A contradiction, I admit, but a challenge she thankfully met.

Actors’ Studio tapings are notoriously lengthy. James Lipton just loves to linger over that brick of blue index cards, and this turned out to be no exception. Carrey was interviewed for a solid five hours, which will be whittled down to a mere 44 minutes of content when the hour-long episode airs on Bravo! in the USA on Jan. 10.

Math dictates that the cutting room floor will be carpeted in gold. So yes: about those notes…

C.J. has been kind enough to share pages and pages (and pages) of notes, to be consolidated and shared in two parts. Today: standup and films. Monday: creative process and philosophy. 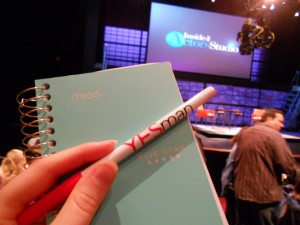 Tools of the trade: that poor pen had no idea how much writing it was about to suffer through.

James Lipton explained that it is a very significant anniversary, as he has been asking Jim Carrey to join him on Inside The Actor’s Studio for the past 17 years.

After the intro, Carrey raced out and proceeded to race around the stage, disappearing for several moments and then reappearing in the rafters.

After seating himself to the right of Lipton, Carrey took a sip from his own tall glass, filled with a golden substance. The first words of Jim Carrey on Inside The Actor’s Studio:

“I drink my own urine, constituted of my own energy source!”

Carrey discussed his reasons for not coming on the show. He explained that it wasn’t some difficult actor move as some had speculated, but rather was greatly in part to his shyness.

After being forced to work late-night factory shifts as a teen to help support his family, Carrey left school on his 16th birthday.

“I went immediately to Yuk Yuks. The experience did not go well. Anyone that has a devastating experience, and people tell you it’s over…[he becomes emotional and very firm] it is never true.”

He didn’t go back to doing standup for two years, and then:

“The same thing happened to me at The Comedy Store. [impersonating nay-sayers] ‘Career’s over!’”

“Two years after that, I returned and hit it big.”

The subject was brought up about making it as a successful Canadian comic within Canada, and what happened next in his career as a result. Lipton raised the question of what exactly happens when a Canadian reaches the top in his or her homeland.

Carrey discussed the “triumph of Canadian comedy”. In a commanding voice, Carrey pointed and declared, “Go to the Americas!” He began to riff, portraying some Canadian Comics disguised as tourists, but attempting to sneak in. “We’re [just] going to see the falls!” as he made shifty eyes.

Lipton commented on the tremendous amount of talented comedians that have come from Canada. Carrey responded, “There’s talent EVERYWHERE! Borders have nothing to do with it. [applause] We’re one big country club…it’s one big house.”

His dual citizenship was discussed. Carrey joked about how he’s spreading himself around the world:

“…women everywhere…babies…cuz it’s just too much money to leave to one person – she’d go CRAZY!”

Carrey discussed a six-month period when he was in Vegas. He decided to not repeat any of his material, and go onstage without preparation, as a means of toughening himself up artistically:

“I called it ‘performance art’ ‘cause it just wasn’t funny yet! I drove out half of the audience every night!”

With a laugh, Carrey recalled Rodney Dangerfield coming up to him after one performance during this period.

[as Dangerfield] “MAN! They’re lookin’ at you like you’re from another fuckin’ PLANET!”

During this period, Carrey said his performances were so bad, that audiences actually got into fights with him onstage.

Before so many shows, “I’d be staring up at a light bulb, sweating, saying, ‘What am I doing?’ I never wanted to repeat my material. Comics would come up to me saying, ‘I’ll take it [your old material] if you’re not going to use it!’ Chairs would fly at me.”

He was up there feeling, “this is uncomfortable for me!” but he stuck to it. “In Living Color came from that experimentation.”

“Damon Wayans added me to the auditions. I was in a hallway with 400 people. The first time I met Keenan Ivory Wayans, I mocked an assassination attempt on his life. He loved it.” [Carrey did the same “assassination attempt” impression as he does during the ‘Hollywood Bowl’ scene in the film Yes Man.]

On a sketch that didn’t make the cut:

“There was one with an anti-abortionist ventriloquist and a fetus puppet, doing a back and forth… a struggle for life!

[Ventriloquist] ‘Well you don’t LOOK human!’ [Puppet] ‘Give me a couple months!’

“Tom Shadyac and I thought, ‘We’re going to end our careers! But what a great time we’re having!’”

Carrey had dinner with Anthony Hopkins [since people would “take his calls”, after his becoming famous].

“During that conversation, I learned that Anthony Hopkins’s [characterization] method was the same for Hannibal Lecter as it had been for me with Ace. Ace was based on a bird [bird walk, even the hairstyle was based on a cockatoo]. Hannibal was based on a tarantula.”

JL: Is Stanley Ipkiss based on anyone?

JC: Not really. [After some thought, Carrey suggested that Stanley] “was me, without the flamboyant” characters he typically plays.

“For Stanley, I was in a good place to play the role. I struggle with trying to fit any one [acting] method into all situations. The choices you make….things don’t have to be real! It just has to be art. Picasso turned things upside down. If the effect is real, it’s real. How can I make this abstract? Learn as much as you can learn and use all of that stuff. Don’t have a thought director. It’s fun to experiment with that. There’s a bajillion ways to do things.”

On the Farrelly Brothers:

“It’s like they’re going from school [on the set]. You laugh your guts out. It’s really fun.”

“Jeff Daniels was an essential part of the movie. He gave it credibility. We were auditioning comedians that were trying more to ‘score’ than to ‘commit’. He was alive and a real person.”

“It was one of the first scripts that was the answer to my affirmations. I didn’t live [the themes in the film] until years later. The lesson of Truman came back to me. It really has come to be [intense public scrutiny with the paparazzi, reality shows, etc.]. To risk popularity and people’s acceptance to do something that’s meaningful, you have to divorce yourself from what others expect for you and it’s always worthwhile making that journey.

“‘Good Afternoon, Good Evening and Goodnight’ was inspired by something my dad would always say. My dad was deaf in one ear and he would always say things before he left, to make sure everyone was going to be alright.”

MAN ON THE MOON:

JL: Did you ever take a break from the Andy character during the filming of Man on the Moon?

JC: I would be him all day through bedtime, with the only exception being the weekends when I’d be with my daughter.

On the origins and experience of his Andy Kaufman character development:

“I was [in Malibu] having coffee, asking myself: Where would he be? Who would he be? If he was alive – where is he NOW? Then the answer/thought came to me: Speaking telepathically. And at that exact moment, thirty dolphins surfaced.”

Carrey followed this experience by only “talking telepathically to people”. It was “a fascinating thing…they [the cast and crew] didn’t know what to do with themselves!”

Carrey recalled that at one point a man was brought in to prepare him for an upcoming shoot with a conga lesson, during this “telepathic” stage. The teacher inquired how Carrey would like to play a tune with Carrey’s response being, of course, strictly telepathic. He demonstrated his intense gaze in response to the instructor to the audience.

His telepathic experimentation both on and off the set, “made people focus on me, made us close, it was amazing.”

He commented that people listened better as they had no choice and were more trusting of their instincts and intuition, etc.

JL: Was there a REAL Andy Kaufman?

JC: Of course! He couldn’t get his father to accept him. To do Latka, he wore his father’s sport coat to try to get someone to love him. His father loved his brother more…I looked at that first. I went to his grave site with his sister, Carol.

ETERNAL SUNSHINE OF THE SPOTLESS MIND:

“I was going through a terribly broken heart at the time.”

Carrey did an impression of ESOTSM director Michel Gondry commenting on Carrey’s emotional state at the time.

“[With a thick French accent]: OH! You are MAGNIFICENT! You are TOTALLY destroyed! This is beautiful!”

Carrey added that Gondry directed him to try to find a pocket of misery and hide in it.

“I chose to hide from the camera…[as if] to not be seen.”

“For Eternal Sunshine, I opened up the wound. Michel Gondry was casting people in the film to look like my ex-girlfriend. Ellen Pompeo was cut out of the film. She looked like my ex.”

Carrey comments that he was very sorry to see Pompeo’s scenes cut, but was very happy for her when she got her big break shortly after.

On working with Morgan Freeman:

“I never take for granted working with good people. They bring you to life”

“The Fingerling character was so much fun, to be that guy. The tattoo – girls like ‘em!”

I LOVE YOU PHILLIP MORRIS:

“I didn’t know what to make of the character…. What struck me was the relentlessness when it comes to love.”

On his approach for ILYPM and a suggestion he offers the acting students:

He cited the Anagrams book as being good for offering perspective [possibly referring to ANAGRAMS by Lorrie Moore], as it zeroes in on where different character types are incorporated from. We all start out with a false belief about ourselves, and whatever your mistaken belief about yourself is, you form a personality based on that. Essentially, believing that “I have to be this, to get that” and you form a character around that.”

On the subject of his exploration of love and relationships for the film, including the film’s theme of abandonment:

“A person wants to make themselves magical…some way [to become attractive and to attract]. Love becomes intense when you have no sense of self.”

His reaction when Ewan McGregor signed on to play Phillip Morris:

“Great lay, by the way! [begins to riff on this]…He changed my WHOLE world!…I’m a Scorpio, he’s a Scorpio…”

On getting to the place he needed to be to embody his character’s feelings for McGregor’s character/for the romantic relationship:

Thank you to C.J. for the superb level of detail! Part II will deal with more general content about Carrey’s creativity, philosophy, and life perspective.

Jim Carrey: Inside “Inside the Actors’ Studio”, Part II →