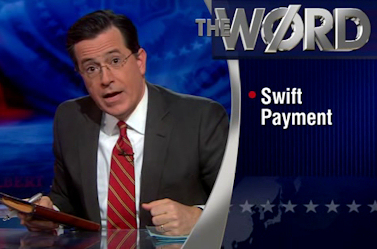 From the “huh, that’s neat” files…

If you caught Monday night’s Colbert Report, you’ll recall that the subject of The Word – Ted Turner’s population control ideas – was a natural fit for the thick layer of Jonathan Swift A Modest Proposal references. What you probably don’t know is that famous piece of satire is very front-of-mind for the Colbert writers, especially as it relates to The Word.

A few years back I was fortunate enough to take a course called Writing For the Colbert Report, from then head writer (now executive producer) Tom Purcell. Writing The Word is tough, boy, and it was a multi-week process to lead us through writing just one of ’em. Tom’s first piece of advice to us? Read A Modest Proposal.

If you’ve never read the piece, it’s online in full. Quite the match, eh? If not for the 1729 linguistics, you could almost hear Colbert himself delivering it.

If you missed Monday’s show, Americans can watch it here and Canadians can cross their fingers and hope to find it here.

Just a small meta moment worth sharing. The more you know!

Since I’m talking about Colbert writers I’ve sat in front of in a classroom, Eric Drysdale – possibly the only sketch writing teacher who can draw iron-clad parallels between architecture and comedy – has released a cool little project. It’s a Viewmaster reel! Yup, exactly the kind of Viewmaster reel you’re thinking about. Eric is hardcore into 3D photography (or stereoscopy), and his Man With F.E.E.E.T. set is now available online from berezin.com.

Eric was the first comedy writer I ever met, suffering through my awkward requests for an autograph and photo during one of my first trips to New York. He holds none of that against me today, which I think is awfully kind of him. So buy his awesome thing, ok?

2 Responses to A Meta Proposal