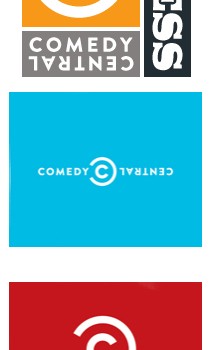 Comedy Central has unveiled a long-overdue re-branding, going into effect in the new year.

Gone is the cartoonish globe-and-skyscrapers logo, which identified the station in two different incarnations. Instead, we have a sleek sans serif font, with two letter “C”s mirroring each other in the middle and the “Central” flipped around for some flavor.

While my first thought was “hey, I’ve seen something like that before”, it seems that only the Comedy Central Press page may be done in orange. The acceptable colors provided are two different blues, red, yellow, and green (sorry Pantone nerds, I’m not even going to try to elaborate on those).

It does kind of have a “copyright symbol with a twist” thing going on. I admit, that makes me giggle simply because it wouldn’t be the first time Comedy Central made a creative interpretation of copyright.

The new look is being teased on the public website via a sizzle reel promoting their 2011 lineup. The delightful irony being that those of us in Canada get an auto redirect to the thing that our Comedy Network purports to be a “website”. Complete with its terrible 1997 logo made by a designer who was probably instructed to make something “wacky” and “zany”. Mission accomplished, dude.

It’s kind of like getting an expensive new couch, and realizing how much worse it makes the old wallpaper look.

Congrats on not pulling a GAP, Comedy Central!

Canada. We can't have nice things.