Jim Breuer is a lot of things. Standup comic. Former Saturday Night Live castmember. As of Tuesday, you can add “author” to the list as his book “I’m Not High: (But I’ve Got a Lot of Crazy Stories about Life as a Goat Boy, a Dad, and a Spiritual Warrior)” hits the shelves.

As the title suggests, it’s a mix of backstage tales, slice of life stories stories, and spiritual lessons. Spiritual lessons from Goat Boy? Yes, I’m intrigued too. Breuer spoke with me from L.A. to explain — but not without addressing with the most important subject first. 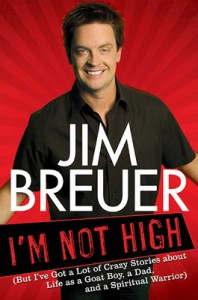 Based on the title, I trust Half Baked has some staying power?

That movie, and the way my eyes always look, yeah. I had to put that statement out there.

I’m curious about the subtitle. I get the Goat Boy part, I get the Dad part. What’s the Spiritual Warrior thing?

Ah, what could that be? Well, this is what I did. I put real-life stories in there and just told ‘em as-is. There’s no agenda to them. I just think that everyone’s born with this awesome spiritual type warrior in them. And somewhere along the way they’re pushed to “you should be this way or that way” or “believe in this and believe in that” and “there’s no such thing as this and there’s no such thing as that”, blah blah…. When I just have regular conversations, people go “WOW I can relate to THAT”. And I don’t think enough of “that” gets talked about. So you’ll have to do a little bit of investigating there, but I think it’s the coolest part of the whole book.

Was the approach to writing it the same as writing standup? Are you a sit-down-and-force-yourself-to-write kind of guy?

No, standup I write down on a piece of paper a premise, and I act the whole thing out in my head, and I act it out on stage. That’s how I write it. The book, I literally sat down 4-5 hours a day and would just write. I’d write the story as I hear it in my head and see it. I’d re-live each story and write it over. It was very exhausting, because it was also an emotional roller coaster. I’d have to relive the emotions of certain sections. I’d finish one section and be really pissed off for the rest of the day. Another section I’d be sobbing because it was a very sad piece of life. I was exhausted when it was over.

It’s one thing to write this in the privacy of your own office, but then you realize it’s going to be out there. Is there anything you had second thoughts about writing?

Were you tempted make every part funny?

Any pieces on there that you have done on stage, or would?

What is it about now that seemed like the right time to do a book like this?

It’s funny because I started writing it in November 2008, so technically the time for me started 3 or 4 years ago. It’s just now that it’s coming out. I’ve done everything, and I may not be a superstar or whatever, but I’ve hung out with every rock star, I’ve met every freakin’ celebrity, politician, you name it. And I love letting people in on that side.

Do you think people will see you differently after reading it?

The ones that seriously read it and get into it, yeah.

I love it. I have nothing to fear of it.