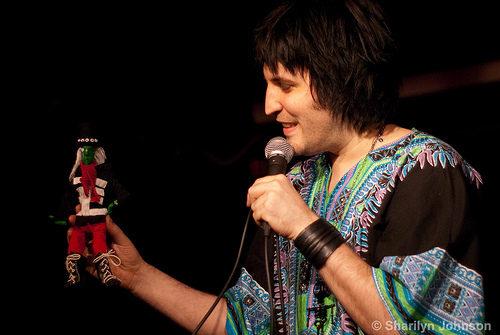 Luckily for us, the concept of “truth in comedy” is a foreign one to Noel Fielding.

In front of his second of three packed houses at Toronto’s intimate Comedy Bar, the uber-popular Mighty Boosh star wove fantastical tales out of small granules of reality. He took us on adventures though having a flamingo as a roommate after a zoological “adoption” program gone awry, the inner dialogue of a fly trapped indoors, and his relationship with his freaky neighbor dubbed “Monkey Edwards”. It all starts innocent enough, but before you know it you realize Fielding has sneakily led you down a dark path of make-believe. He brought with him a hat, a fedora with ears, which he removed at the top of the set but would revisit multiple times in a Jekyll-and-Hyde manner. When he put it on his head, he was transformed into a creepy, gravelly-voiced “rapist” character, which he’d have no recollection of upon removing it.

“This is all tightly scripted, I’ll have you know,” he said, after one round of the clearly improvised weirdness.

But the prepared (or semi-prepared?) material didn’t get unleashed until a lengthy – and necessary – chunk of improv with his audience. The fervor of his fans was contagious to even a jaded comedy blogger like yours truly. They came bearing gifts including Bounty chocolate bars and a detailed hand-made likeness of his Boosh character which Fielding decided was “a voodoo doll”. Gifts were reciprocated with hugs and kisses, which only served to further frenzy the mostly-female crowd. (Thankfully, none got to the point of rushing the stage, which reportedly happened at Thursday’s show.)

I’ve been to Comedy Bar over 100 times, and I can say I’ve never seen a member of the audience come armed with a bristol-board sign to get a performer’s attention. In fact, I’ve never seen a Comedy Bar audience anything like this. I walked in to see a twisting lineup of fans in platform heels and fishnets and gallons of liquid eyeliner… I didn’t need my media pass around my neck to identify me as an outsider. And the screams when the lights went down were deafening.

I can’t say I blame them. He’s as funny as he is charismatic.

If you don’t have a ticket to his final performance tonight, you’re out of luck, but he will be sharing the bill with Todd Barry at the 8pm Double Threat show at Yuk Yuk’s.