It would turn out to be a slightly ironic statement made by Tommy Tiernan at the start of his Wednesday night performance of Crooked Man, pointing out how ridiculous it was that he was beckoned to travel all the way from Ireland “to do something you’re very capable of doing among yourselves – laughing.”

As it happens, as an audience we collectively were responsible for a good chunk of the evening’s entertainment. After an impromptu us vs. Tommy debate over Canada’s hockey dominance, the show quickly became a banter-filled event, clearly not a part of the plan.

Audience members thought nothing of engaging in conversation with Tiernan when it was called for. And in a few cases, when it wasn’t called for (I’m looking at you, middle-aged guy on the aisle of row F).

“This is not a fuckin’ resident association meeting!” he finally retorted, just minutes before he busted a woman in the second row for pulling out her cellphone.

Turns out, her babysitter was trying to reach her. Tiernan drew it out into a lengthy saga, providing hilarious commentary on her departure to the lobby to make a call, returning to her seat, and later in the show getting another call. (Possibly the most literal example of a “callback” ever seen on a standup stage.)

Between the interruptions, Tiernan did manage to deliver his bits about caffeine addiction, sex, the recession, sobriety, marriage, and my personal favourite story of the night — indoctrinating his seven year old daughter into Liverpool soccer fandom.

There was an attempt to frame all his bits with a single mission statement. For the life of me I can’t remember what it was, which goes to show how cohesive the theme was. A minor complaint, that.

It felt odd to watch him with a hand-held mic instead of a headset mic. Its flailing around – sometimes drifting as far as his waist – was a slight distraction but didn’t hinder the

Having seen Tiernan do 20 minutes on a past Just For Laughs Comedy Tour, I was already hungry to see a full set from him. And it’s at around the 20-minute point that you settle into his frenetic pace, and stop worrying that you’re in for an exhausting hour and a half. An extended set like Crooked Man is precisely the way Tommy Tiernan was meant to be enjoyed. 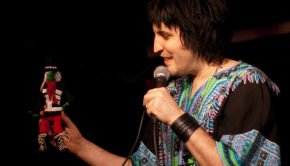