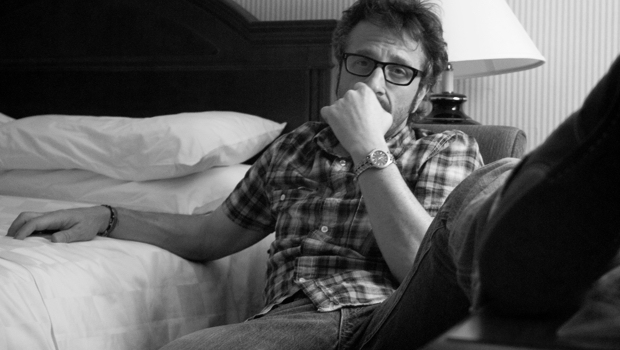 Since premiering in September of last year, Marc Maron’s podcast, WTF, has become required listening for anyone who claims to take an interest in the comic mind. His interviews with comedians provide twice-weekly sustenance to even the most studious of comedy fans, and with his own life and thoughts at the forefront of every episode, listeners have gone from just knowing Maron’s name to feeling like they really know him. I sat down with him in Toronto to talk about the process, the listenership, and the genesis of WTF. Maron: It was pretty impulsive. I’d been fired again at Air America. My partner Brendan who was my producer for years on radio and on the internet, tv, we’d just lost our jobs but we still had our passcards, so we said “let’s try to podcast”. So we’d basically break in to Air America after hours and just hijack the studio and have guests come up. Which was kind of awkward. We’d have Gaffigan, or Stanhope, or Janeane, or Caroline Rhea who were coming to these late-night sessions. We’d tell them “text us when you’re here” and we’d go down the back elevator. So at first we really didn’t know what was going to happen with it. We thought maybe we’d get 1,000 people listening by virtue of my small name power. But then people started to dig it, so we got on a regular schedule with it and let it evolve.

Has anything surprised you about it, as far as putting it together? It seems like it should be a lot of work.

It’s like a job. It’s definitely taking up a lot of time. Doing what’s necessary to get it out there, and getting people t-shirts. I do all the guest booking, and lining up all the stuff. But I like the work and it’s starting to make a little money. And Brendan and I are a really good team. He does all the production and I trust him implicitly. I enjoy getting an audience and talking to people again. And really getting to know my peers. We all know each other, but a lot of people I’ve never really spoken to for that long. I don’t think anyone has talked to Dave Attell as long as I have in one sitting.

Have you gone through your list of people you know really well, and are getting more into people you haven’t had long conversations with?

I’ve never had a long conversation with any of these people really. Not that focused. We just know each other from here and there. There’s only been a few people on the show who I know really well and I’ve talked to at length before. Maybe three. Jerry Stahl and Sam Lipsyte are close friends of mine. David Cross I lived with, but that was one of the shorter interviews. But for the most part, I’ve never talked to any of these people for an hour straight. So I haven’t tapped out. There doesn’t seem to be a shortage. There are some people I want to get that I seem to be sort of having a hard time getting. Louis is difficult. He asked me to do a part on his show last week on a day’s notice, fly to New York, which I couldn’t do. But I ask him over and over to do the podcast and he refuses to even answer. But he asked me to a part on his show.

So he doesn’t hate ya.

No, no. Just busy. Priorities are priorities.

Saget wants to come on. I think that would be interesting. Gould, we’re trying to work out a date. Dane wants to come on at some point. Anthony Jeselnik, Patrice O’Neal, Colin Quinn, Lewis Black. I’m booking some live New York shows with Jessi Klein and Joe Mande. Robert Kelly. Keith Robinson I’d like to have on. I’d like to have Tim & Eric on. I just did Tig Notaro last week. Jim Jeffries I did. Ben Stiller came up to the garage. Dylan Brody I did last week, he was very good.

Do you do much prep for it, or do you like having a regular conversation without someone’s bio stuck in your head?

I don’t do enough prep, really. I end up not talking to people about things that I should. But then it turns out that an hour went by, so I guess I didn’t need to know that much. Sometimes people are like “why didn’t you ask them about this?”. I don’t know, I just didn’t know. The monologues I don’t really prep for. With certain guests, there’s something I want to get at, that’s more of a personal thing than a career thing.

Are you going to take any breaks at all? Summer vacation?

Both Brendan and I are pretty compulsive. We haven’t really talked about it. Wherever I go I bring my equipment with me, and I feed the beast. I’m going to Ireland next week and I’m going to do a show from Ireland…. The road shows are kind of a specific thing, to get the feel and get the texture of the place and feel some movement. Tomorrow I’ll do an open for the Thursday show, and it’ll be Toronto-specific, but it’s not really a road show because the interview’s not from the road. But the road shows are their own thing, and you’ve got to think in terms of that through-line and make it feel like what it is, to travel and be in a different place. It’s walking around in that sort of heightened way.

One Response to Marc Maron: Part 1