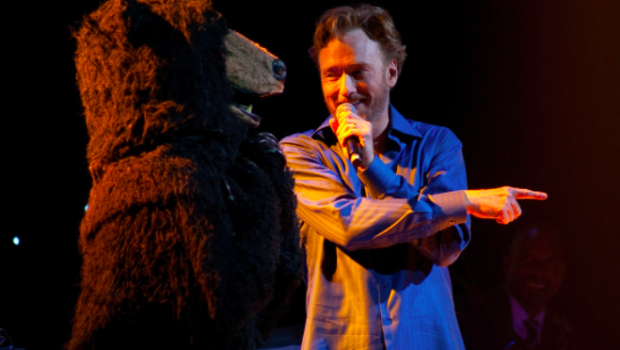 So what? I'm still a rock star. Conan kicks ass at Massey Hall, May 22.

It’s truly perplexing how the reviews in the mainstream media can be mixed, because you’d be hard-pressed to find someone leaving Massey Hall on Saturday night without a smile on their face.

But even those ubiquitous hints of what the evening would entail were no preparation for the all-out circus presented by Conan & co.

By 8pm, the show’s designated Twitter hashtag of #fedexpope had become the #1 trending topic in Canada. But once the lights dimmed, so did everyone’s smartphone screens (with the exception of the visiting Rachel Sklar, who you can always count on for real-time commentary).

The band – LaBamba, Pender, et al – built up crowd’s energy to a full-on frenzy before Conan finally walked out to a standing ovation and did a lengthy standup-style set before moving on to the true insanity, with the help of sidekick Andy Richter.

We got the Walker, Texas Ranger Lever. We even got the string dance. We got Conan licking LaBamba’s face. We got, frankly, everything we could have hoped for and then some.

Conan’s willingness to look like an ass meant we were treated to him emerging from backstage at one point in a hilariously hideous re-creation of the purple paisley leather suit from Eddie Murphy’s Raw. This prompted an impromptu costume competition from Flyerman, a local personality (though only marginally loved?) who I obviously haven’t lived here long enough to be aware of. He was wearing a light-up suit. He wanted us all to know it. There ya go. The best part of this was the little celeb-sighting on the big screen: TSN’s Jay Onrait sitting behind him, which seemed a little unjust.

Tonight Show writer Deon Cole killed with a standup set that seemed the perfect length to break the show up without losing the song-and-dance momentum.

The pretaped greeting from Triumph the Insult Comic Dog was done in true Conan style, with the comedy inspired by the format itself. The “insert local references here” jokes were well-researched, with the crowd favourite being “Church and Wellesley”.

The script seemed looser than I expected, particularly with the banter between Conan and Andy. It would be easy at this point in the tour for them to go on autopilot, but judging from the band’s reactions (even in the dark), plenty of the comments were new to them too.

The encore to the nearly 2-hour set was Cancon-friendly, with Conan strapping on the guitar again for The Band’s The Weight, and 40 Days by Ronnie Hawkins & the Hawks which he called “the greatest rockabilly song ever recorded”. With inexplicable level of energy (performance high!), Conan ran through the crowd and seemingly teleported himself up to 2 locations in the balcony while playing. Perhaps anyone hoping for some epic comedic finale (the FedEx Pope himself?) might think this to be a letdown. But fans know how much Conan loves music, and I defy you to watch anyone being that passionate about anything and feel disappointed. He was having as much of a blast as we were.

Conan entered this tour with nothing to lose. He could do anything he wanted to do, and if he wanted to be a rock star? Mission accomplished.

Previously, I’d only ever seen opener Reggie Watts perform in tiny venues to crowds of hardcore comedy nerds, and it was a pleasure to watch him win over such a large, mainstream crowd.