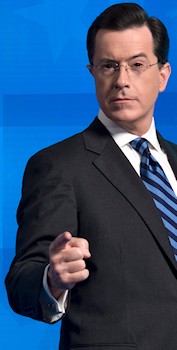 All the Report’s a stage, the men and women merely players.

I like Deepak Chopra. I really do. I’ve picked up a few of his books. I followed him on Twitter for a while (until that dark day when he was stuck in an airport with nothing to do but tweet). 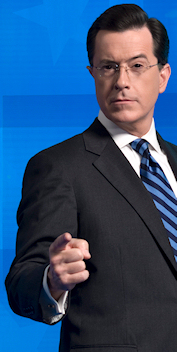 But when I sat 20 feet away from him at Wednesday’s taping of the Colbert Report, I wanted to run onto the stage and slap the rhinestone-encrusted glasses right off his face.

Chopra is the latest in a string of recent guests who just doesn’t understand the game of the Colbert Report, and makes the terrible choice to call Stephen out for being a comedian. Chopra’s was the worst example I’ve seen in the history of the show.

If you missed it, Chopra was promoting his book The Shadow Effect, which talks about the dark/embarrassing side we all have. He began to analyze Stephen’s shadow, which started out great – he called him pompous, self-absorbed, etc. Clearly talking about the “Stephen Colbert” character. So far, so good.

But when he presented the idea that everyone’s shadow comes with a gift, it all went wrong. Stephen’s gift, he says, “is to provide comic relief to America.”

Despite Stephen’s best efforts to deflect and justify the betrayal against the game, Chopra refused to let it go.

Here’s the problem: A huge part of the joy we take in being fans of the Report is the knowledge that “Stephen Colbert” and Stephen Colbert are two different people. The real Stephen is comedian. The character is not.

As the audience, we’re in conspiracy with Stephen to keep this character real for the purpose of comedy. We all know the reality. We’re all just putting on a show. But there’s a sense of mischievousness surrounding this secret we’re all pretending to keep, and it’s pretty damn fun.

The best way to ruin our collective game of make-believe is to – like Chopra did – refer to Stephen as a comedian.

It was done a few times earlier in the show’s run. In 2006, Nora Ephron gleefully pointed out that Stephen had a “personality change” since they’d last worked together, leaving even Stephen too surprised to deflect. In 2007, Mike Wallace called Stephen’s style “comical”, which he was slightly better prepared to handle.

The show has been around for five years, and I thought we were getting past this problem simply because of its ever-heightening profile. But the game-ruining trend seems to be returning, though generally not with celebrity guests. A few times recently, a lower-profile guest brought on earlier in the show has been responsible.

But why is this still happening at all? Before each show, a guest is briefed on the fact that Stephen is playing a character. He tells them to “disabuse me of my ignorance”. Do they need to be told more?

Colbert has fun – as he says – “wearing the character loosely”. He breaks character just often enough to let us know he’s still under there, and there was that recent interview with Gorillaz which was a mind-blowing meta experiment.

HE’S allowed to poke holes in his own character. When someone else does it, it’s vandalism. And while it’s not exactly a matter of life and death – and Stephen almost always improvises his way around it – it takes us all out of the moment. It’s unfair to the viewers and unfair to Stephen.

So I implore you, future guests of the Colbert Report: stop ruining our fun.

5 Responses to All the Report’s a stage, the men and women merely players.