He’s known to viewers as the guy in the audience who always gets shot in the leg, but Tom Purcell is one of the strongest voices behind the character of Stephen Colbert. Today, that voice is a little stronger, as Purcell has been promoted to Executive Producer of the Colbert Report.

Giving Tom the title is a no-brainer. He’s worked his way through the ranks (writer, head writer, supervising producer, co-EP) and he deserves a big “congratulations”.

And that’s a sincere, based-on-personal-experience “congratulations”. I was incredibly fortunate to study under Tom at the PIT in NYC, in the inaugural Writing for the Colbert Report class in early 2008. He taught with great care and sincerity, to a point where we were almost suspicious of this successful guy who inexplicably wanted everyone else to do well too. 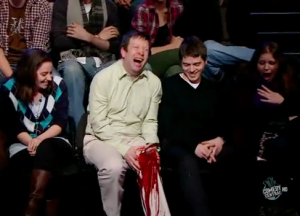 He was Head Writer at the time, and I’m still not sure how he didn’t burn out from the total Colbert submersion. He’d work Mon-Fri, teach Saturday, and provide us with feedback on our assignments by email on Sundays (and often beyond). Nuts. When we met up again 6 months later, and in the middle of a Saturday afternoon, I found him predictably scribbling show ideas in his notebook. Dude doesn’t stop.

This is on top of whatever massive undertaking is in the works at that place at any given time — whether it be a book to write, a Christmas special to produce, a Presidency to campaign for, or a warzone to broadcast from. For the aspiring writers who want to know what it takes to move from staff writer to EP in less than 5 years, well… I imagine being able to handle all of that without breaking down and weeping is a big part of it.

There’s something sweet about the ultra-American ideal of working hard and getting ahead coming to fruition at the Colbert Report of all shows, isn’t there?