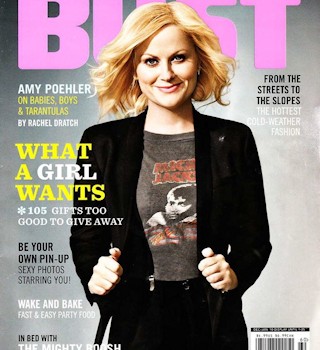 You have approximately 1 day to hit the stores before Christmas, yet you’re reading this blog. You’re in trouble, my friend! 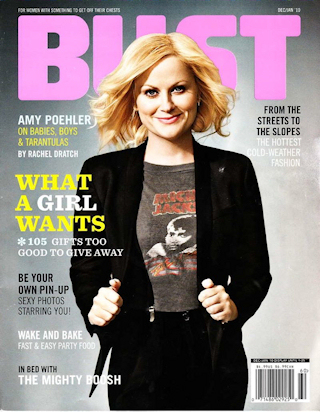 But here’s a quick stocking stuffer for the female comedy fan in your life (or perhaps yourself).

Amy Poehler graces the cover of BUST magazine for the second time, and it’s a feature to behold. Rachel Dratch conducts the lengthy interview, covering everything from her early days in Chicago and the Upright Citizens Brigade’s move to New York, to her current life and the nuanced passive-aggressive sniping that happens between mothers. Topping it off is a set of gorgeous photos – a few full-page – by Sheryl Nields.

BUST, for whatever reason, is always found in the gay section of my local bookstores, so check there first. It’s really just a mag for independent women, sans all the take-a-quiz-about-your-boyfriend Cosmo crap. It’s become a personal favorite for its comedy savvyness, from frequent comedic cover girls (Amy Sedaris, Kathy Griffin, Sarah Silverman, Flight of the Conchords) down to the regular feature by comedy writer Laura Krafft (was on the original Colbert staff and is now with the Wanda Sykes Show).

Get thee to a mall.