What Ellen Degeneres Knows for Sure

I’m not ashamed to admit I fully bought into the “Ellen on the cover of O” hype. I PVR Ellen daily, and watched as her campaign for the cover evolve from a joke into reality. So when, the evening before its official release, I found the issue at a deserted Gateway newsstand at Newark’s terminal A, I gleefully clutched it as if my Little Orphan Annie Secret Decoder Ring had just arrived. 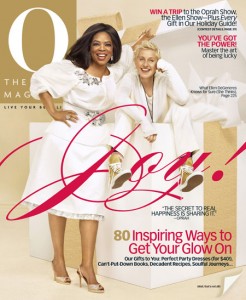 Ellen Degeneres on the cover of December's O magazine.

While not as smokin’ hot as her W cover feature shots a few years back the cover – and its alternates – are quite pleasing. The newsstand version features Oprah sitting atop a gift box, with Ellen pouring booze from a flask into Oprah’s champagne glass. The version for subscribers has Ellen emerging from the box (both feature the word “Joy” in huge red script splashed across the full width of the page, a fantastic use of the commonality between the issue’s two themes: Christmas and Ellen). Inside are 2 additional covers with the ladies decorating a huge gingerbread house, and Oprah tying up Ellen with a string of Christmas lights.

Ellen pens this edition of the monthly column What I Know For Sure. The introductory list of things she knows is purely jokey, but substance comes quickly in the body. “There’s nothing I know for sure because I know for sure that things change.” She talks about self-identity, coming out, being ostracized in Hollywood, and how ultimately those types of experience “give us layers of depth and make us interesting.”

The actual feature? It meets my expectations. The first page is dedicated to rehashing the cover campaign story, biographical info, and finally the start of the phone Q&A with Oprah. While some old ground is re-treaded, the balance of the interview gets into those spiritual-ish topics that Oprah is known for — in this case, in relation to Ellen’s coming out, becoming a vegan, being in love, and how being a performer will influence her upcoming American Idol duties.

I certainly view Ellen as a very balanced and very happy person, which fascinates me given all that she’s been through. The interview does shed partial light how that is, but I don’t think completely nails it. I suppose I’m a little disappointed in the length of the feature. Given the thickness of this issue (I had a hard time keeping it balanced in the bathtub), I had expected more substantial Ellen content.

But is it worth buying? Yep. Especially if you like per-pound deals when buying your periodicals.