Writers of Late Night With Jimmy Fallon at the Paley Center

All the news that was fit to jot down and frantically type up in the hotel room between events…. A.D. Miles noted that Jimmy picked people who were stepping up into their roles. This was his first time as a head writer. He said that’s been beneficial to those with little tv experience, because “everyone felt we had something to prove.”

Wayne Federman did standup with Jimmy prior to Fallon’s SNL days, and reconnected on the road while Wayne was teaching standup to Clint Black for the failed reality show Secret Talents of the Stars.

Jon Rineman was a freelancer (faxer) at the start and was brought on staff. He had been a faxer for Leno and was living in New Hampshire with his parents (“jealous?”).

Jeremy Bronson was a producer for Hardball with Chris Matthews, moved to LA to write for Chocolate News, and submitted a packet for Fallon.

Morgan Murphy was recommended by A.D. Miles, as they had known each other for many years. She had previously written for Jimmy Kimmell Live.

Amy noted that submitting for a show that doesn’t exist yet is a challenge, because you don’t know the voice of the show.

Their process:
-Everyone basically sits on their Macs and works alone; usually no formal collaboration with each other except for a few bits like Thank You Notes.
-Premises/subjects they want to write about will go out the night before.
-Wayne culls them down to present to Jimmy
-Jimmy culls them down further, and then will test them out to an NBC studio tour group

Murphy noted that it’s difficult to find a new take on similar news stories that talk shows have been doing jokes about for years. Some archeologists will dig up an ancient body, so you think “which old person is this going to be about”, and maybe it’s a Larry King joke. You don’t always feel proud of the jokes you churn out, but sometimes there isn’t an original option.

7th Floor West
-Jimmy wanted to do a Hills parody because he liked the show
-Was supposed to be a one-off bit, but became a series because the audience liked it so much. It’s likely to return for a “second season”
-Amy Ozols said that because there tends to be so much improvisation during the filming of taped bits, it’s difficult to write too far ahead and predict a story arc.
-Pretaped bits like this (and Real Housewives of Late Night) film in the evenings, sometimes starting while the show itself is still taping.

Bad Sketches
One of their worst ideas was a volcano that lived under the stage that needed to be fed strange things, like 800 lbs of baked beans. A trough was set up that went over the audiences heads and the beans were slowly fed down it into the stage. It got nothing. “It was Gavin [Purcell]’s idea,” said Murphy. It was noted that this bit immediately followed the April Fool’s Day monologue which was delivered entirely in Japanese.

Jimmy is very good at interacting with audience members, so a lot of bits, like the games, are simply a vehicle for getting audiences members to him.

Jon Rineman noted that the freelancers receive the list of premises/subjects at the same time as the staff writers, which helps a great deal. Leno did not do this for his show’s freelancers.

The length of the monologue can hinge on the number of good jokes they have in a given day. In the past week, one had 7 jokes and another had 21.

They all agreed that Jimmy is great to work for. Amy Ozols said, “he’s just a dude.”

The question was raised about Jimmy breaking up in mid-joke, but the writers unanimously agreed that they have no problem with him doing that. Miles noted that Jimmy “has a wonderfully silly sense of humor” and that he’s genuinely tickled by a lot of the stuff that’s written. It’s never planned.

An example was brought up of a pitch meeting where Jimmy sang the song that would eventually become “Let Us Play With Your Look”. One of the writers secretly recorded it on his webcam, and says it’s great to watch Jimmy go from singing, to laughing hysterically, to singing again. He’s just having a lot of fun with it, and it’s fun to see it. 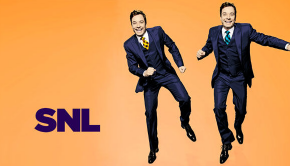