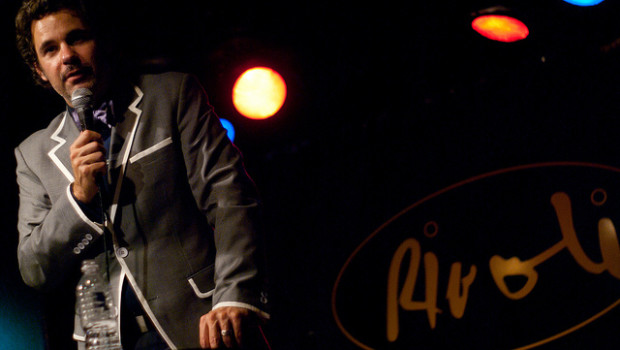 Paul F. Tompkins loves Toronto, and the feeling is mutual.

“O Canada! Thank you to everyone who came out to The Rivoli last night. One of the best nights of my career, truly. What fantastic audiences,” he tweeted, the first of 5 such gushings.

With 2 shows at the Rivoli on Sunday night (normally home to the weekly standup series Laugh Sabbath), Tompkins played to rooms packed with fans who had campaigned on Facebook in favor of his presence. It seemed every alt-comedy player in the city was there, the lineup outside buzzing with Toronto performer-centric keywords like “Humber” and “Bad Dog”.

At show #2, Tompkins was very clear that the early show would be hard to beat, and that the onus was on us — not him. I think neither party disappointed the other.

Tompkins is one of those guys I’ve appreciated for a good long time, but it only dawned on me last night how accessible he actually is. He’s identified as an alternative comic, and certainly his uniqueness and the intelligence of his material fits what seems to be the definition of “alternative”. But I would book him in any mainstream club, and I would have no problem sending my parents to the show. If memory serves me, the set was entirely clean, too. How often does a guy that slick get so much nerd cred?

The attendance of so many comics was perhaps felt strongest when Tompkins snarked about guys like Dave Chappelle doing 7-hour shows, saying that the bulk of the set would contain the phrase “so… what else is going on?” This, the same weekend as Comedy Bar announced that Hotbox star Pat Thornton — sitting in the back row of the show — would be doing a 24 hour marathon set as part of the venue’s 1-year anniversary. Just plain hilarious for those who made the connection (though I don’t think Tompkins was aware).

Losing track of time 3/4 through his set, Tompkins asked for clarification on how much he had left. Little assistance was forthcoming from the darkness. Time indeed flies when all involved are having fun.

More photos after the jump.