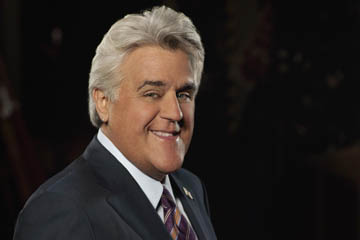 If it’s a contest, it must be awesome

My ears perked up when I heard the words “comedy correspondent” from my tv during a commercial break. When you’re a journalist specializing in comedy, discovering another one of “you” is rather exciting.

The promo was for a contest with Citytv, a national tv network up here in the Great White North. I was intrigued about the gig enough to check out the information on the website.

Love Jay Leno? Willing to work for free? Has Citytv got a deal for you! (NBC Photo: Mitchell Haaseth)

Seems pretty good upfront — you get a job promoting the new fall lineup online (they’ve picked up Leno, Accidentally On Purpose, Modern Family), and they’ll throw in a trip for two to LA. Not bad!

Er… um, okay, I’m up for that! Let’s take a stroll through the rules & regs and look a little closer at what your new duties will consist of.

That would be a nice chunk of change to have before Christmas! And that’s just the minimum wage. Imagine what Citytv must be paying someone spearheading a multi-faceted social media promotional campaign. Production skills, writing skills… they also want you to be funny… this ain’t the kind of work you can get for cheap.

“Please note that this is an unpaid position.”

But at least the hours are flexible, right? All I’d have to worry about is “development of weekly video about the shows”, and “commitment to watch the new Citytv fall line up each week”. I can do that at my leisure. I have a PVR.

“Development of original weekly tweets before and after the TV shows”

Oh. So you kinda do have to watch the shows as they air, eh? With primetime being 8-11, on both coasts, that means being tethered to Twitter for a 6 hours period every night. No going to bed ’til Leno’s over on the west coast! Must… tweet… Headlines….

But this is awfully cynical of me. There ARE benefits.

“return economy air fair for two (2) from a major city airport closest to the winner’s home to Los Angeles, California”

Oooh, 3 star! Runs about $83/night on Hotwire. Of course, the Citytv admin assistant booking the trip is likely not educated on which areas of the greater Los Angeles are unsafe, so there may be even better “deals” to be had from their perspective.

“Winner and travel companion are solely responsible for all ground transportation, taxes, transfers, travel insurance, spending money, tips, meals and other travel and hotel charges not specifically mentioned as part of the prize.”

Ah, so this is going to cost me money now. I see. Might want to add “health insurance” in that list, since I still don’t know what part of east LA my hotel is in.

An aspiring actor/comedian friend on Facebook indicated an interest in applying for this, because of the potential for making contacts and getting a foot in the door.

Still sound attractive? Have nothing else to do with your evenings than catch Cougar Town on timeshifting? Deadline for video submissions is tomorrow, so you better get on it. There’s already a whopping 9 entries on their Youtube channel (yes, for a NATIONAL contest) so you can go see what you’re up against.

Thanks for this exciting opportunity, Citytv, but I think I’ll stick to blogging. Call me if you decide to have a budget.

One Response to If it’s a contest, it must be awesome