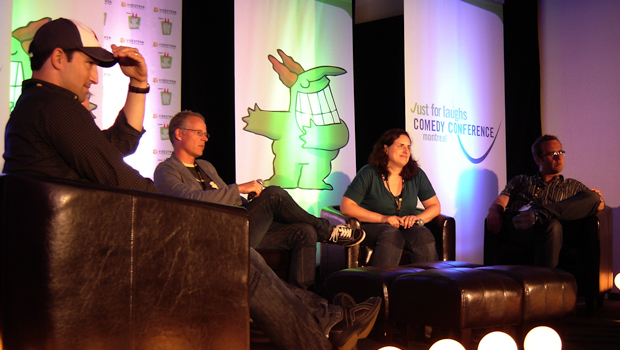 Alright, let’s tighten these things up, shall we? The balance of Thursday’s seminars weren’t quite as rockin’ as the not-all-that-rockin’-anyway development panel in the morning, but here’s the gist of what went down:

COMEDY’S NEXT GENERATION OF WRITERS

Changes in the industry lately? A few panelists cited the work of Judd Apatow and Todd Philips making it possible to make films that aren’t star-driven.

Does writing for the internet require a different type of pacing to account for shorter attention spans? Etan Cohen says that pacing has increased in general, and everyone is packing more into a shorter timeframe. He cited the Comedy Network series Hotbox as an example of a good fast-paced show.

Tami Sagher said that on 30 Rock, they will write subtle jokes into the background to reward fans for paying attention. And as for that McFlurry product integration controversy? They really did just do that on their own, without receiving any money (just permission) from McDonald’s. Sagher admits the staff may have been naiive to think audiences wouldn’t automatically assume there was a cash deal in place.

Etan Cohen is working on the film adaptation of the Candy Land board game, and has found one unforseen quirk in the writing process: some Candy Land candies are specific to the US, and they need to be excluded from the script so the film can play internationally.

Best advice for young writers? From Dan Sterling: “Become a director.” No, seriously. Put your own stuff online, he says, because people are more inclined to watch a Youtube video than read your Office spec script.

Best quote, I believe from Kris Brown: “We can talk about all the shows we love, but Paul Blart and Two and a Half Men will stomp the shit out of those.”

Comedy's Next Generation of Writers

I’ll be honest — I was tardy in my arrival for this one, but thankfully there’s a very detailed recap available at The Comic’s Comic.

Two quick things I took away from this:

Funny or Die doesn’t run ads before each clip on their site. But Michael Farah expects this to change within the next year. You have my sympathies, nerds.

And yes, Darrin McAfee from E-Comic Branding did talk about how easy it is to get artists’ “superfans” to do the “heavy lifting”. I think we’ve all seen this in action for quite some time. I’ve been a journalist for 10+ years, and always find it adorable that people who run fansites or fanblogs get all proud about their new best friend at some publishing or film company, who generously hooked them up with the thinnest of promotional content. It keeps working, though I think E-Comic is aiming to make it work on a more substantial level.

Just hours after this, E-Comic sent around the “customized” Jim Breuer insert-site-name-here promo, encouraging a select group of bloggers to post it on their sites. On the list of reasons why I didn’t post mine, getting my blog url wrong is at the top. Feeling like I was asked to show up at a party in the same dress as 5 other girls is a close second. And the assumption that you guys don’t come here to watch an ad would be third. If I were Jim’s biggest fan, I would have squeed heavily over the (mangled) mention of my site’s name and posted it everywhichwhere. But I’m not, so I didn’t, and I haven’t. (Am I too jaded? Don’t answer that.)

COMEDY DIRECTOR OF THE YEAR AWARD: Todd Phillips (The Hangover)

I almost didn’t stay for this, because people are usually only given awards as a way to lure them to your event. Whether this was the case with JFL or not, it didn’t matter, because it was actually fun and not at all as false as I’d predicted.

Dianna Schwalm from Warner Brothers Canada gave a slick introduction to Etan Cohen, who opened his speech with “I would thank God, but I’m not sure he approves of what I do for a living.”

By contrast, Bryan Callen took the stage for a hilariously awkward tribute to his Hangover director Todd Phillips, who reminded the young directors in the room that “if you’re getting into comedy for accolades and awards, you’ll be disappointed.”