I’m tempted to say the second group of New Faces performers was slightly stronger than the first one I saw, but based on the improvement in audience energy that may be an unfair assessment.

Andy Ritchie
Good joke writer. “I remember when college girls used to look at me. Now they just keep an eye on me.” On his shower head being stuck on the massage setting, “I feel like a ’60s civil rights activist”.

Matt Knudsen
The man wore a suit for us! We’re honoured! Good stuff, including a bit about spending 2 months’ salary on an engagement ring but picking 2 months from 1986, and a nice extended closer about all-you-can-eat buffets which is one of those bits that you know he’ll be rewriting and adding tags to for years to come.

Mary Mack
Sounding just like Maria Bamford is probably both a blessing and a curse for her. She deals with her high-pitched voice off the top, but is able move on quickly. My favourite line: “Stay positive! Every time I catch myself being negative, I cut myself.” I dug her vibe and her connection with the audience, but found the closer (playing Don’t Fence Me In on the recorder) a little more offbeat than funny, and maybe best kept to alt shows.

Chris D’Elia
It may have been an odd setlist construction coincidence, but the bulk of his material centred on stereotypes. His friend buying him pants for his birthday (kinda gay), black guys getting away with wearing anything, and how Germans sound like they’re talking in rewind. On paper, it doesn’t sound amazing, but delivered it went over huge. Good material coupled with fantastic physicality equals the biggest ovation of the night.

Mike Bridentstein
Started off with some standard I’m-an-average-guy stuff about being the fattest he’s ever been right now, but my favourite bit of the night was his impression of his commercial agent’s assistant leaving him voicemails. If you’re going to do that bit, might as well do it infront of an industry crowd!

Kumail Nanjiani
I think this guy is more recognizable to New York comedy tourists than the Naked Cowboy. He does every show in town, and thus the only guy on the bill who I’ve seen before. I already liked him. I still like him. He’s one of Variety’s 10 Comics To Watch, so does he really need more ink?

Renee Gauthier
See my review from the previous New Faces; not sure why she was on both shows, but I wasn’t complaining about seeing her again.

Alex Koll
This guy looks like Zach Galifinakis fell asleep for 100 years. “Welcome to wizard comedy night,” he appropriately greeted us. He did bits on April Fool’s Day, Prince, and alchol before surprising everyone with a move that I won’t ruin here. My favourite joke: his girlfriend rolled out of bed onto the floor, so he yelled “5 second rule!” and kept fucking her.

Myq Kaplan
It’s rare to watch a young comic be somewhat improvisational and have it not come across as sloppy. He opened with 2 jokes, one visual in response to one of Alex Koll’s gags, and another in reference to a joke told by host Adam Hills. Always risky, but it worked and certainly endeared the crowd to him. Standout bit: how losing your cell phone is like losing a child (a child who knows all your friends’ and family’s numbers, so it’s like losing an autistic child).

I should note that it’s hard to do a proper assessment of New Faces. These guys for the most part ARE new, so you can’t review them up against the other acts at the festival. But they’re not open micers either, and all of them were ready to be there. No overwhelming nerves, no bombs, no tragically stupid mistakes.

About a year ago, a British comedy nerd friend of mine recommended Ross Noble. I didn’t pay much attention, because people are always giving me advice on what I should check out, and less than half of that advice is any good. But after my exposure to Ross Noble last night, I feel quite the fool for ignoring the recommendation.

Infront of a giant greyscale psychedelic poster of his own head, Noble had worked up a sweat within the first 2 minutes. A woman walked across the front of the stage at the very beginning, and Noble latched onto the idea of her being lost while on a tour of the JFL Museum (the show’s venue), leading to the expectation of schoolchildren and Japanese tourists being not far behind. This, I would discover, is his style. Audience-inspired tangents using the improvisational “if this, then what?” frame of mind.

It was completely impossible to tell which moments were scripted. Some of them had to be, and surely he would direct his stream of consciousness slightly to end up where he wanted to end up. But for the life of me, I couldn’t identify where the improv ended and the prepared material began. I believe I’ve been outsmarted. Well played, Mr. Noble, well played.

The pace and energy of the Montreal edition of the Sketch Show was vastly superior to its Toronto counterpart (I made the decision in advance to not review that one, which I’m happy about). The show was hosted by the hilarious duo Garfunkel & Oates (Riki Lindhome and Kate Micucci) who opened with what should be a childfree anthem, Pregnant Women Are Smug. The highlight of the Imponderables’ set was a an action movie trailer parody, with Waldo (of Where’s Waldo) as the villain. As fate would have it, the Idiots of Ants opened with a bit featuring Waldo as well, which may have actually benefited by the parallel thinking. Birthday Boys supplied 3D glasses to the crowd for an “experience” that may have worked better for those seated directly infront of the thrust stage, but was mighty cool nevertheless. And 2 White Guys – aka Rebecca Drysdale (one of my favourite people to watch anywhere, anytime) and Jordan Peele – went all-out with their upbeat sex educators schtick which I’m bummed I can’t find video of to show you. But I will show you the trailer from the Imponderables. Half a million hits on YouTube, and justified. 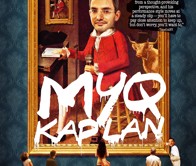