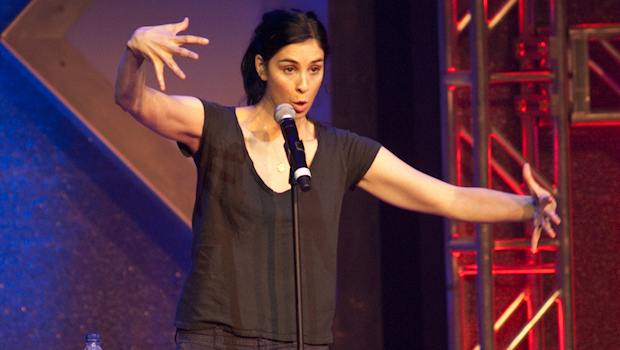 “Can you believe this lineup? Seriously.”

Silverman kicked things off with straight standup, opening with the requisite reference to the local municipal workers’ strike:

“They’re making us feel so at home here. They feed us, put us up in a nice hotel, put all this garbage in the street to make it feel like New York…”

In true Sarah style, she recounted a story about her pubescent niece, and mused bout the power of the word “pussy”. At the midway point we were treated to a few songs (3 in the early show, just 2 in the late show due to some red light disobedience in the first half).

Mulaney, in his first visit to Toronto, mused on crime investigations before the days of DNA, why drag queens’ perception of what a woman looks like is based on a housewife from a Far Side cartoon, and provided the night’s best throwaway line:

“…In my spare time, when I’m not trying to figure out who Tyler Perry is…”

Barker started off his 12 minutes with a meta bit about a hack airplane joke, leading to a Star Wars themed variation on it to prove “my shit’s fresh and original!” Barker’s Toronto reference du jour: contemplating the amount of pot he’d have to smoke in order to enjoy the Bata Shoe Museum.

Introduced by Silverman as her favorite comic, Glass opened both sets by toying with his relative lack of name recognition. For the early show, he had the band play him on at great length as he “modestly” acknowledged the long-ago petered-out ovation. Late show, he simply asked “where are all the people I drew here tonight?” His fantastic rant about how making rape jokes doesn’t mean a person endorses rape only made it into the first set. A shame, considering how many rape-related jokes were indeed scattered throughout all the comic’s sets. It couldn’t have been more relevant.

Cross displayed his Toronto research while recounting his search for poutine earlier in the day, which he figured he’d find by walking up Yonge “’til it peters out.”

During the early show, Cross mocked the festival’s hour-long rehearsal that afternoon, noting how useful it was to confirm his ability to shake hands with Sarah, and to prevent him from going to the side of the stage and taking a nap in the middle of his set. My favourite Cross bit of the night centred on how Coors Light treats their customers like “retards”, making cans with a bigger mouth and making the mountains on the can turn blue when it’s cold (“Thanks, I was using some of my other senses.”)

The man himself, Louis CK, closed out the show to the loudest ovation of the night. It’s been 6 months since he was last in Toronto, so of course he unloaded material I hadn’t heard before. When he’s back in Toronto in October, he’ll likely have a whole new hour (presale password for those tix is “cklive”). Hell, when I see him in Montreal next week, he’ll probably have a new hour. An hour from now he’ll have a new hour. (Dude writes a lot, is what I’m sayin’.)

The only negative moment of the evening? The genius in the balcony during the late show who yelled out “Jimmy Kimmel!” to Silverman. In what state of mind does this seem like a good idea? She handled the shout-out to her ex-boyfriend well, responding with “thank you for breaking my heart on stage….You must be an awesome friend.”

It should be said: Toronto galas are far more enjoyable than Montreal or even Winnipeg Comedy Festival galas, purely because they aren’t televised. At taped galas, the house lights are kept half-up to capture audience reactions. Slightly counterproductive, as people laugh harder in the dark. Massey Hall is a great venue for comedy, even though the venue staff seem to live on a whole other logic plane. But that’s a story for another day.