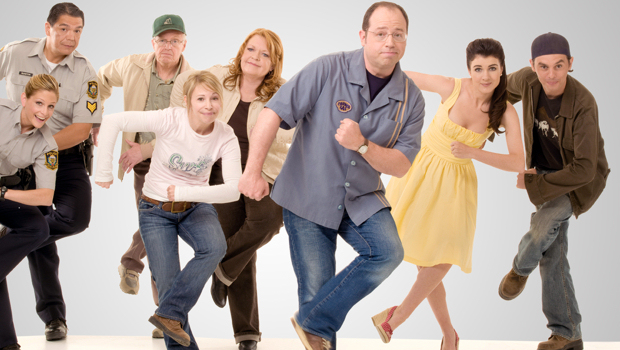 After six seasons, how does the place with “not a lot goin’ on” make its departure memorable?

Tonight marked the end of Corner Gas, one of the most successful comedies in Canada’s history. And if you needed a reminder as to why it defies the odds of sitcom success in our country, the final script provided it in spades.

For the benefit of my non-Canadian readers: Corner Gas is a single-camera half-hour, the creative brainchild of veteran standup Brent Butt. Butt plays Brent Leroy, manager of the gas station in the fictional town of Dog River, Saskatchewan, which is sparsely populated by Brent’s parents Oscar and Emma, diner owner Lacey, RCMP cops Karen and Davis, coworker Wanda, and the perpetually unemployed Hank. Brent Butt grew up in rural Saskatchewan, and has often said that Corner Gas is what he imagined his life would look like if he’d never left. The show airs in the US on WGN, and full seasons are on DVD.

The finale plot is simple: Wanda can’t figure out why Brent mysteriously leaves the gas station in a hurry every Wednesday evening, not returning to town until well after 1 a.m.

If you’re like me, there’s only one reason why you’ve regularly stayed out that late on a weeknight. If they’re doing what I think they’re doing with this episode, I thought, this show is even more brilliant than I gave it credit for.

Much to my glee, they did.

The gang secretly follows Brent into town, all the way to the comedy club’s open mic night. They’re stunned to see him on stage at the Chuckle Barn — and doing well.

“It’s like Brent’s got this whole other life,” says Hank.

What follows is the inevitable awkward responses of friends and coworkers upon their discovery of an open micer’s pursuits: A suggestion for your act! You’re talking about me on stage? Why aren’t you ever funny at work?

They’re ultimately all supportive, except for Emma. She doesn’t want to see her son get famous and abandon Dog River.

“At your age, going off to do some sort of cabaret routine…. You should be stuck in a rut with a wife and kids,” she says.

Even worse for Emma is when Brent gets a message from the club, offering him a spot on a national tour. She tries to prevent Lacey from passing the message along to Brent, but to no avail. Brent is on the verge of leaving Dog River.

Lacey makes a passing reference to Brent finding success by moving to Toronto, which Butt actually did. Will art completely imitate life, with Brent leaving Saskatchewan to pursue comedy?

Of course not. Why would he go on tour for weeks at a time, he says, to do shows for $40 and share a motel room with a greasebag making $90? Brent stays in Dog River, puts standup behind him, and continues life surrounded by the people he loves.

The comedy geek in me is compelled to mention how an amateur being invited on a national tour isn’t the most believable turn of events (at least send the bugger to a college nooner first). It’s also a little sad when Brent crosses standup off his bucket list, dismissing it as just something he wanted to try (consistently enough to get invited on a national tour?). An hour-long episode would have softened those shortcuts nicely, and provided opportunity to bring back elements of the legendary Comedy Night episode.

Geeky nitpicks aside, it’s impossible to complain about the choices made in the finale’s script. It would have been so easy to go out with a bang and send Brent away. A big, dramatic, ultra-meta, water-cooler ending.

What made Corner Gas such a success was the idea that Dog River will always be the same. We fell in love with these characters. We didn’t want to leave Dog River, and indeed couldn’t imagine anyone – including Brent – wanting to leave Dog River.

There’s nothing more satisfying for a fan than feeling like a show’s creators understand you. Corner Gas fans couldn’t have asked for a happier ending.

Just For Laughs: The Alternative Show →