A few weeks ago I got talking with an improv classmate of mine who used to do standup. Shop talk ensued, and at one point I presumptively inquired “you’ve seen the Jerry Seinfeld documentary Comedian, right?”

He had not. Worse, someone had bought it for him as a gift years ago, and it sat neglected on the shelf because he assumed it was a another concert dvd. I would have reached across the table and smacked him one if not for the 2 pints of valuable lager sitting between us.

Film recommendations often fall on deaf ears, but this one required some hard-core convincing. Comedian had such a huge impact on me that I couldn’t leave it to chance.

I’d always loved and respected comedy, but aside from the privilege of interviewing the guys doing one-nighters at my campus while in journalism school, there was nothing I could really DO with that. I’d become accustomed to appreciating comedy from afar.

In 2002, I heard about this movie coming out, and was instantly intrigued. It didn’t disappoint. I knew what I was seeing was the truth of the standup experience. I walked out of theatre with the singular thought: “I have to be around this”. 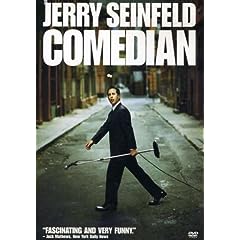 After becoming actively involved in my local comedy scene in a peripheral and a social way, and then finally starting to perform myself, I still view the film as completely accurate. Sitting around the comics’ table IS like that. Building a setlist CAN be stressful. Bombing DOES happen to everyone. You WILL meet strong personalities along the way. And all these things ARE awesome.

After excitedly explaining all this, and repeatedly pleading him to watch, my classmate was convinced (or maybe just afraid I’d go Clockwork Orange on his ass). He took the cellophane off the dvd that Saturday.

The result? After 5 years away from the mic, he was up all night writing. And now two of us can’t believe the dvd collected dust on his shelf all this time.

Miramax’s marketing department came up with 7 taglines for the film. One poster screams, in large white lettering: “Without a doubt, the single most horrifying movie you’ll every see (if you want to be a stand up comedian)”.

They got it wrong. Perhaps it’s horrifying if you aren’t a comedian at heart and can’t understand why anyone would go through such a difficult process. But if you are, you’ll only see the passion, dedication, and camaraderie that make it all so great.

If there’s a dormant comic in your life – or if that describes you – this is the movie to watch (or rewatch) as new year’s resolutions loom.

The Invention of Photoshop? →

6 Responses to Last-minute gift suggestion for the dormant comic