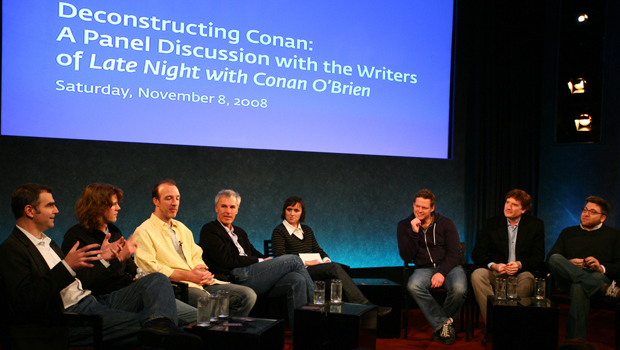 Vowell started her questioning off with a request for the writers to discuss their biggest failures on the show.  It turned out to be brilliant, prompting story after story of flat jokes and cut sketches.

Johnson noted that as a monologue writer, his defeats are more frequent but also more fleeting.  One joke in particular still haunts him. “The punchline was ‘John Travolta’s cat’, and you had to know a lot to get it.”

Stack remembers a character created by another writer, years ago, called “Dan Dana, the guy who’s never heard of bandanas”. It’s still referred to in the writers’ room, because there was nothing to the character other than that single characteristic.

The writers took great pleasure in blaming each other for the bits that didn’t work, and each other’s humiliation when they recalled having to act in one of them.  “It’s a bonding thing,” McCann confirmed.

“The more work that goes into it by other people, the more likely it’ll die in rehearsal,” said Weinberg.

When rehearsal goes poorly, Conan yells “chambers!” as a sign to Sweeney that it’s time for a private conference in his dressing room.

McCann had the “pleasure” of accompanying the Ventriloquist Dummy Choir to Budapest.  He was the only one to fly first class (“writers’ guild rules”). The ventriloquists were adamant that their dummies not be checked as baggage, and they wouldn’t fit into the overhead containers.  So McCann found himself flying with eight dummies in first class, each one strapped into a seat.  (But still in their boxes of course — otherwise that would be crazy.)

Of the celebrities to do a “Secrets” segment, Weinberg says Snoop Dogg was the funniest and most professional.  Sweeney cites Gene Simmons as one of the more difficult ones, because he refused to mention other celebrities in the jokes and give them free publicity (“no free rides!”).

The origins of Triumph the Insult Comic Dog are probably well-known to the dedicated fan, but I admit this nugget was news to me:  Triumph was originally supposed to be a beatnick poet dog, performing in a sketch about the talent portion of the Westminster Dog Show.  The bit was cut, but Triumph was brought back as an insult comic.

The inevitable question of the move to Los Angeles came up.  How will the show change?  “It’s going to be a game show.”  But seriously, says Mike Sweeney, “it’s an ongoing process and we’re only now starting to think about it.”  He also said they’re thinking about killing off all the recurring characters before heading to LA.  Let’s hope he picked up on the panicked gasps of “noooo” from throughout the audience.

Writer Brian Reich (who came up with the Masturbating Bear) left the show in 1998.  He was curious if he’d still be able to get hired on if he tried. During his final weeks he submitted a packet with a fake name on it, and hired an actor name Hank Flynn to play him in an interview.  Brian/Hank got the job.  Mike Sweeney and the rest of the writers gathered around and got Hank on speakerphone to offer him the position.  He requested to be taken off speakerphone, and subsequently told Sweeney that he wasn’t all that excited about the show anymore, that he liked Seinfeld better, and wasn’t going to take the job.  Sweeney was shocked, but Reich let him off the hook soon after.

Retaliation:  Reich had been hopeful that on his last night, Conan would say something about him at the end of the show.  Sure enough, the final segment came, Conan said “we’re losing a great writer tonight”, and then called Reich out on stage — who they’d secretly hired Hank Flynn to play.

During the audience Q&A portion, the writers were asked for advice.  And asked again.  And then again.  More on this in a moment.

But McCann gave the most in-depth advice for performers looking to break through.  He cited his time as an improvisor as being great for creating characters and finding what kind of performer you are, but it’s something that can’t be captured on camera or relived later.  “If you want to do this professionally… you have to develop other muscles”.  Like most improvisors, his first attempts at standup were brutal, but necessary.  Dicipline is very important. “Those nights of horrible standup nightmares are amazing learning experiences,” he said.

The other writers also gave credit to Brian Stack for being the most generous with his time when it comes to giving advice to the show’s interns.  (It should be noted that Stack also gave loads of his time to answering questions on the Aspecialthing.com forums, which sadly were eaten due to a server crash a while back, but his efforts are still very much appreciated by people like me.)

The advice was great, but did we need multiple versions of the same question posed by the audience members?  Did everyone secretly hope that Sweeney would finally break down and say “ok, you’re all hired!”?

Even the first person to make the very legitimate inquiry into the necessity of an agent, an eager young man, managed to let it all go wrong.  He got his advice, and one of the writers jokingly asked him “do you have a joke you want to submit?”

Instead of doing what the rest of us would do, he said “yes”.  After proudly reciting his joke, an open-mic caliber nugget of hackery about abusing “retarded” kids, you could feel the entire audience collectively thinking “even an agent isn’t gonna help ya, bro”.  When half the panel stood up to applaud him, I considered feeling bad for him, but I guess what you don’t have self-awareness about can’t hurt ya.

Runners up for the “wish I get a still shot with the red ASS stamp across it” award:

The woman who asked about Conan perhaps getting a sidekick, because “I understand he had one at one point”.  Research, hon.

And when the moderator says “we have time for one last question”, please have something better up your sleeve than “What do you think of Conan’s hair?”

The panel was videotaped for the Paley archives, and while it may make its way onto their website at some point, the best way to see it is to visit the Paley Center in NY or LA.

2 Responses to Deconstructing Conan: Panel Discussion with the Writers of Late Night