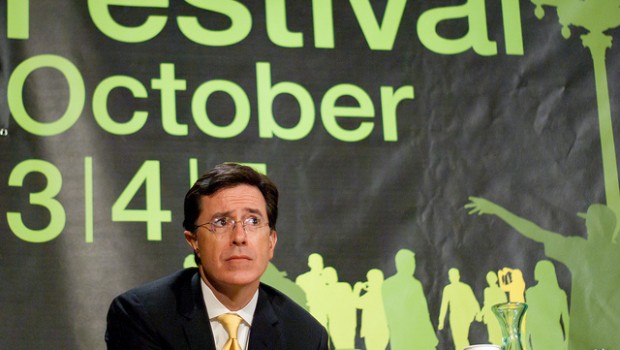 Putting Stephen Colbert in a venue that only holds 450 people is a pretty sure way to guarantee a sold-out New Yorker Festival show. Not only were the tickets snapped up within an hour of the on-sale time, but droves of people waited a few hours at the Festival’s headquarters the day before the show to score one of 40 additional tickets. And the last ditch standby line? That began 4 hours before the show.

There’s nothing I love more than discussing comedy. And when I learned that one of my favourite comedians was doing exactly that, in such intimate surroundings, I didn’t hesitate to make the trip (I suspect I’m the only attendee who required a passport in order to get there). Hell, I’ve waited patiently for an event like this. It’s not that I haven’t seen Stephen in person before, just not under these exact circumstances.

Back in April, he was a part of the “Distinguished Speakers Series” at the University of Buffalo. In a venue that held thousands, he performed largely in-character, doing bits that would find themselves in subsequent Colbert Report episodes. The q&a was short and unsatisfying, unlikely providing anyone in attendance much insight into what makes the man tick. And I found that the level of intimacy, having been to a few Report tapings with only 106 other people in the audience with me, left much to be desired. Until now, my only other experience witnessing Stephen speak in person about his work was as part of a Daily Show panel at Just For Laughs in Montreal back in 2005. While fantastic, the focus was split 5 ways, and the Colbert Report had yet to be broadcast.

On this night, Stephen was accompanied by his wife Evie, who succeeded in making me feel fat and dumpy before she’d even fully emerged from their Towncar (she’s stunning, is what I’m tryin’ to say). A smattering of applause followed them from the car to the door, suddenly making the absence of a red carpet feel like a tragic oversight.

Their driver, and then the security guard, frantically waved down Stephen before he tried to go inside (“sir! sir!”). He had left his laminate on the seat of the car! Crisis averted! He surely never would have gotten in without it!

Ariel Levy served as moderator, a wise choice by the New Yorker. She’s been a guest on the Report before, an experience she told us was only positive. She claimed that after their exchange, Stephen leaned over and said “I’m sorry, I’m sorry, I was only kidding!”. Stephen remembers it differently — something about her having a hot bod. “That might have been my character. And maybe not out loud.”

She proved to be quite educated about the show, avoiding the obvious questions and even asking one that produced a story fans have never been told publicly: How did he and Jon Stewart meet?

Stephen had already been a correspondent under the Craig Kilborn regime for a few years, when Jon was hired as the new host. Comedy Central held a press conference to announce it and to show Jon off to the media. Stephen was in the TDS offices, and thought “hey, shouldn’t we be covering this press conference?”. So he grabbed a camera guy and a mic and headed down there. He acted like a real reporter, asking Jon questions starting with “yes, Jon, Stephen Colbert from the Daily Show….” One of the questions was “Stephen Colbert, Daily Show. I was told that I was in the running for the hosting job.” Without missing a beat, Jon turned to the president of Comedy Central and stage-whispered “you told me he wasn’t funny”.

The rest is fake news history.

As is to be expected, many of his answers were word-for-word repeats of those given in his fantastic interviews with Terry Gross, Charlie Rose, and his show’s own warmup guy Pete Dominic. Classic quotes, yes, but I’ll refrain from rehashing those, because every other blog post I’ve seen re: this event has been doing exactly that (but by all means experience those interviews if you haven’t before).

Here are the “new’ moments that stuck out for me:

“It’s not my nature to be a jerk, but I enjoy it.” It’s embarrassment that typically keeps us from behaving like a jerk, and it’s his failure to be embarrassed that helps him do much of what he does.

“I don’t care what they think of me, but I care about hurting their feelings.”

“I did not intend to do this character in my own name.”; “I bet my character is on a no-fly list.”

After watching a clip of Strangers With Candy: “I haven’t seen that in maybe 10 years.”

“I really like playing status games.” The difference between Noblet and “Stephen” is that Noblet knows he’s a fraud, “knows he knows nothing”. Meanwhile, “Stephen” simply lives an unexamined life.

The show keeps an aggregate biography on the character, but it doesn’t include any backstory that hasn’t been reflected on the show. It only contains facts like him being a Dartmouth grad.

When ABC interviewed him for a job on Good Morning America, he took his daughter Madeline with him, who was about a year old at the time. She went over to the corner of the office and “de-potted plants the whole time.” He still got the gig.

Stephen isn’t teaching Sunday School this year, but hopes to again next year when his son John goes through Catechism.

When asked if he’s funny as a Sunday School teacher, he claimed the kids are funnier. “They immediately ask questions that you thought were so deep in college.” (Sorry ladies, no King of Glory dance!)

TCR will do just fine for material if Obama is elected. “I’ve maybe said Bush’s name three times in the past nine months”.

On the White House Correspondents Dinner:

When his pre-taped segment was airing, he looked over at Helen Thomas to see if she was enjoying it. Bush was staring right at him, “doing his best Josh Brolin.”

He read one positive and one negative review of the speech, and then asked his wife to put all the other clippings away. “I might as well go listen to a focus group” for all the help reading reviews would do.

“I like jokes. It’s not helpful for me to think about what I do as crusading.”

Stephen does things like that with “joy, not malice,” and hopefully the audience would perceive it.

An audience question about Jane Fonda elicited the standard background story about the Cooking With Feminists segment (where Fonda kissed him), and then the lap-sitting incident (where Fonda… uh, did more than that).

After Fonda-on-Colbert Action Part II, the crew went out and purchased flowers for Stephen to take home before the taping had even ended.

When he arrived home and offered them to Evie, the initial conversation went something like:

When Evie finally watched the show, she was amused by Stephen’s overt discomfort. And all was well.

After a short verbal sparring match between Stephen and his wife, seated just a few seats down from me, Evie herself finally spilled the truth about what she really said about that segment:

“I said ‘don’t you EVER let ANYONE take over your show like that!'”

(Hate to break it to ya Stephen, but it looks like it just happened again. Score one for Evie.)

The video of this exchange had better make it onto the New Yorker Festival’s website soon. No amount of transcription could possibly do it justice.

On his Presidential campaign:

“The game just unfolded itself.”

He truly was disappointed when he found out he wasn’t going to be allowed on the ticket, and from his demeanor when recounting the story it seems he’s still feeling a little dejected. But “they [the DNC] backed the right horse, which is reality.”

The Report is currently taping 13 weeks straight without a break until after the election. This elicited cheers from many fans, and looks of utter shock and horror from those of us who have even a vague sense of what it takes to put that show together.

He says the best part of working on his show is his coworkers. It’s a joy machine. “Unless we have some joy in what we’re doing every day, it’s just a machine,” he says.

“But when it’s joyful, there’s no better feeling.”

We feel the same way, Stephen. 16 Responses to Stephen Colbert at the New Yorker Festival